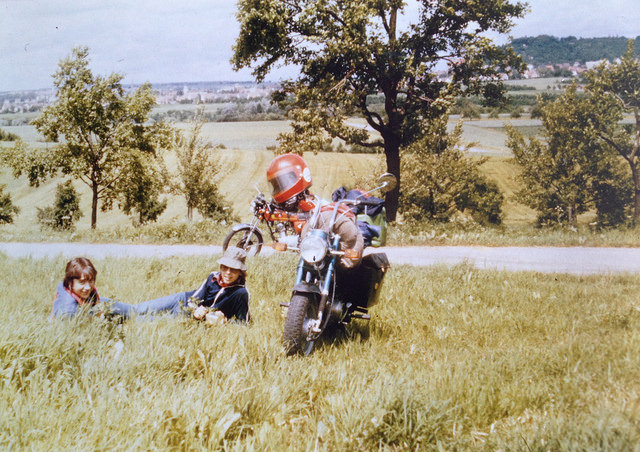 When I went to high school cool guys in my class started to buy themselves a Honda Dax. There were two in my class, Uli, who had one, and my seat neighbour, who wanted one. I envied them big scale, I could not even think about getting one because I did not have money.

When he turned 16, my brother went to the Honda Shop in Schorndorf and bought himself one. I was very envious, somehow he had managed to save more money than I. So for about a year I was limited to ride on the back of his bike, or every now and then, when he did not need it, I could borrow it and go for a spin. With 18 I finally managed to buy my own bike, a Honda CB125J, at the very same Honda shop in Schorndorf, but that’s another story.

We did many trips and holidays together, often with friends on other bikes. One of our first holidays was supposed to go only to the black forest but it was raining cats and dogs and we decide to drive south until we see the sun. Due to the maximum speed of the tuned Dax (see below) it took 5 days of driving and we ended up in the Camargue in Southern France. 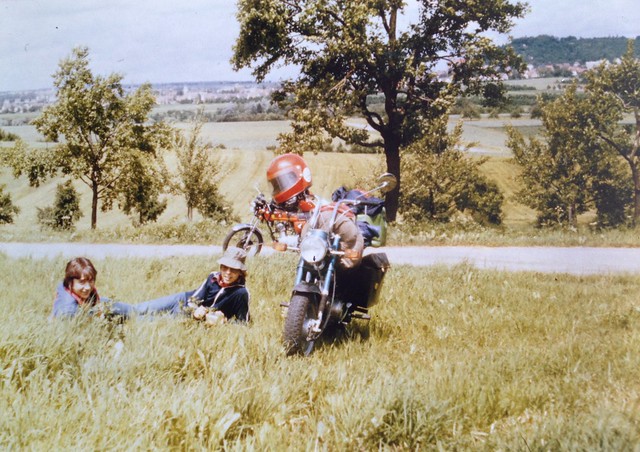 Taking a rest in the Rhine valley on the French side on the way to Southern France with my brother and a friend. 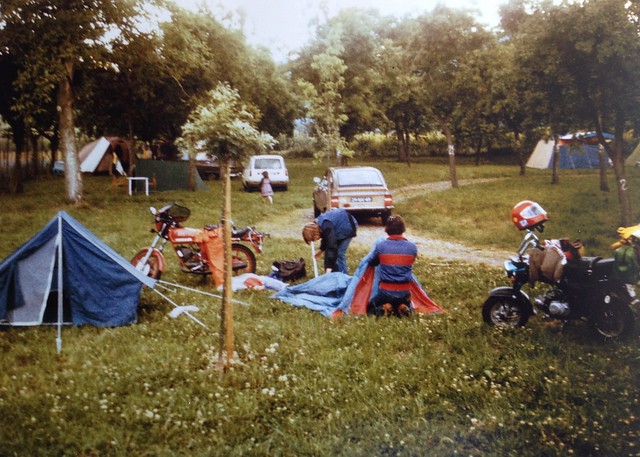 Pitching the tents somewhere in France during our trip south.

The Dax was in daily use, in summer, autumn, spring and winter. 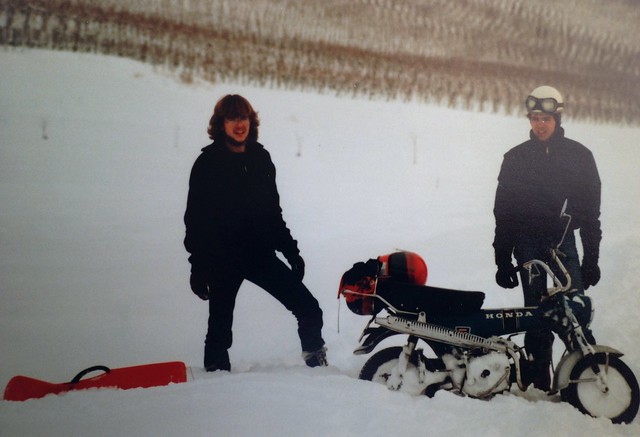 Going sledging with my brother. This was great fun, towing the sledge behind the Dax. The one sitting on the sledge had to eat all the snow thrown up by the back wheel.

In Germany the Dax came in 3 versions. With 50 ccm and 40km/h top speed as Mokick, with 50 ccm and top speed only limited by the power of the engine as Kleinkraftrad, and with 72 ccm and around 5 hp as real motorcycle.

Nobody bought the Kleinfraftrad, because insurance premiums in the 1970s were around 1,000 Deutsche Mark, only kids of very rich parents could afford that. And very few adults bought the 72 ccm Motorcycle version. So most of the Dax in Germany were the 50cc Mokick with 40km/h maximum speed. Technically these were the same bikes like the Kleinkraftrad with two modifications that limited the speed. There was a rubber ofrice in the air inlet limiting the air stream to the carborator, and there was a device in the ignition that changed the timing by using centrifugal force at a maximum engine speed.

So what almost every DAX owner did was remove the rubber for allowing the carb to breath freely and to fix the centrifugal force device in position by just tying some wires around it. The Mokick then easily could reach 60-65 km/h instead of the 40 km/h allowed by the law.