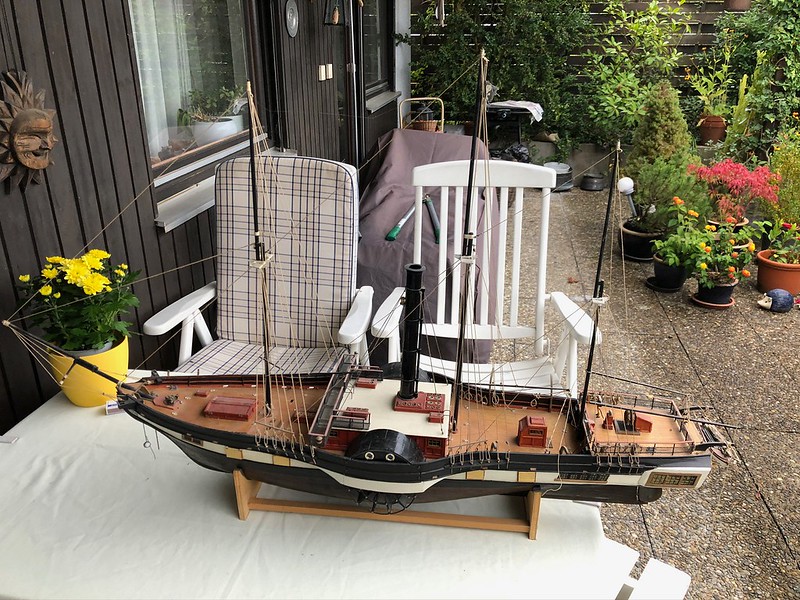 This was supposed to be my masterpiece with real cannons. It never got finished.

For my personal ship building history: I had built many models, small plastic models from Airfix, paper models from Schreiber and later larger, remote controlled models from Graupner like the motorboat Kitty and the fishing Trawler Elke. Those were kits. Later I built models using only plans, like an electric speedboat using plans bought during a visit to my family in Halberstadt in the DDR, and a Tupolev propeller sledge/boat using similar plans. The Elke I had fitted with a self made cannon that used black powder from fire crackers and ballbearings as bullets and converted it into a pirate ship. It could fire one shot, and then needed to be taken out of the water and re-loaded very clumsily. The James Watt was supposed to combine all the skills learned and I planned to equip it with for cannons of similar built on each side, so you could fire two broadsides before needing to reload.

In 2020 with the Internet, which did not exist back then, I found some information here:

I was looking for a ship that had maximum visible effects as a remote controlled model. A steamship with paddle wheels was just that. So I looked for plans and in the German model magazine Modell Bau Heute I found the plans for the James Watt in the advertising section. There was very little information about the original ship. In fact, when I looked for some, there is still very little, except for some very unclear pictures in the internet. It looked like a good base for my project, so I ordered the plans.

The cannon I had designed for the Elke consisted of a brass tube. I soldered a nut with 3mm thread in one end and drilled a little hole in the tube, just next to the nut. Through the hole I fitted a model train insulated wire as ignition cable with the insulation removed at about two centimeters length, and all except for one leads removed. This one lead went through the hole in the nut, which was then closed by a M3 screw, providing the ground for the ignition cable. When 6V were applied to the cable, with the tube grounded, the lead melted and provided enough heat to ignite the black powder.

For the bullets I initially used aluminium foil from chocolate bars, which I pressed into the shape of the gun tube with a little stick and a similar brass tube. This produced a pretty loud bang, a lot of smoke, but was basically harmless. I believe nowadays all this would still be highly illegal due to the gun violence.

In the Elke I had to load the gun, then send her on a cruise, aim by putting the Elke sideways next to the target, then use the trimming function of the 2 channel remote control of the Rudder channel for starting a motor that turned the gun from facing forwards to sideways, once it reached a 90 degree angle, a switch was activated that then ignited the cannon. This took about 3 seconds, the target might have moved already by the time the Elke fired. But it was fun to watch, and to hear spectators commenting “.. there was an explosion!” Then I had to get the Elke back out of the water, re-load, and ready she was for the next shot.

For the James Watt I planned to have 4 guns at each side. Hidden behind portholes. A servo would push them out and they would be fired as a broadside. For re-loading, I designed a prototype of the gun that could be easily plugged in, so that the canons could just be re-placed rather than reloaded. Enough guns could then be prepared in advance for smooth sailing and reloading.

The remote control and electronics

I invested heavily and bought a Graupner 6 channel (in Graupner language 12 channel) remote with the fitting servos. The functions were:

Sound generator for steam engine, I got the circuit in the electronics magazine Elector. The frequency of the steam puffs was controlled by the voltage at the electric motor of the drive, so it adjusted to the speed of the ship.

I built the ship using sandwich architecture, using thick balsa wood boards. This required the second heavy investment since balsa wood was quite expensive at the time. Below is the hull at a very early stage of construction. 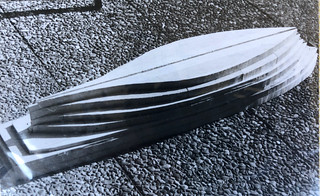 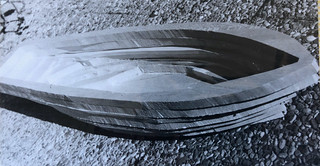 Inspirations for the fittings, deck

The plans did not show any details, and as mentioned above, I could not find any historical record of the ship. Some time ago I had done a backpacking tour to London and had visited the Cutty Sark in Greenwich. I was so fascinated by the clipper that I took around 3 roles of 36mm film slides, which turned out to be great inspiration for designing the details of the James Watt. See the examples below. 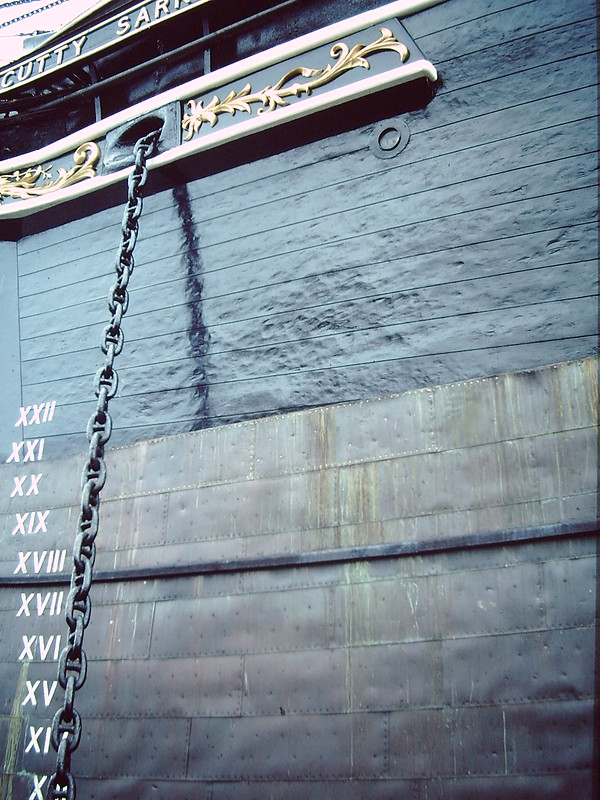 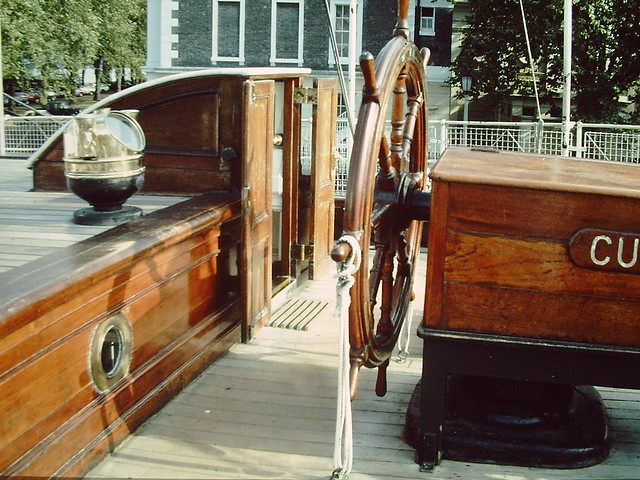 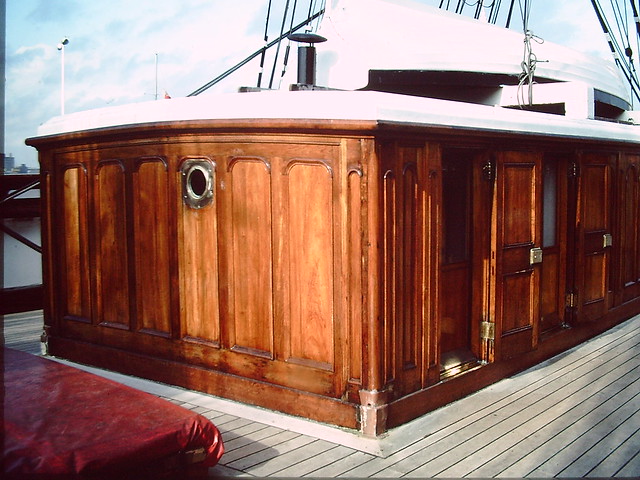 Some photos of my model

Below are some pictures of the model. I never completed it since I got busy with joining the army, then university, moved out of my parents place, and then started traveling the world. The James Watt had a place on a shelf in my parents basement room, that was my home during many years of my youth. The remote I had given to a friend, who was building a Graupner Adolph Bermpol, and seemed to need it more than I. He never finished his boat either. 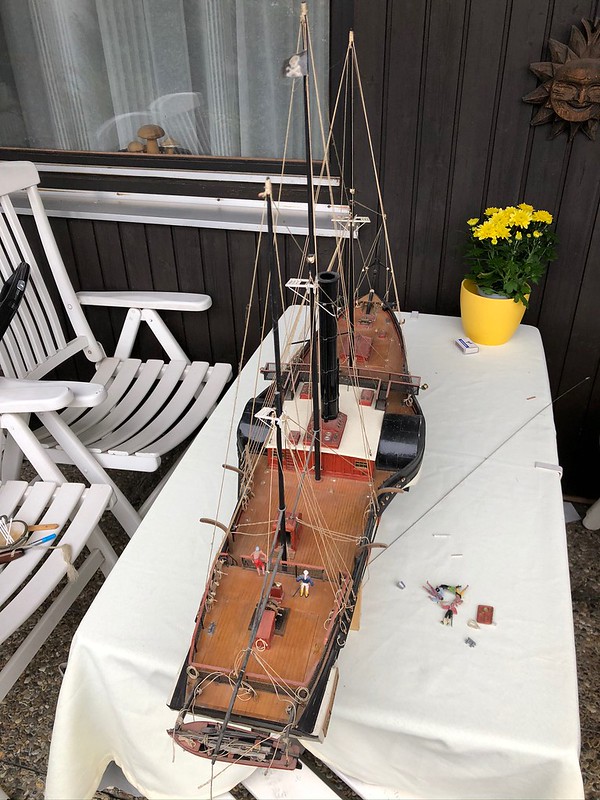 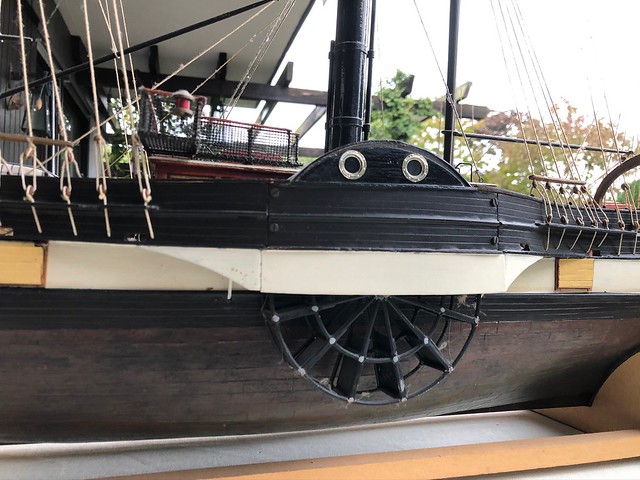 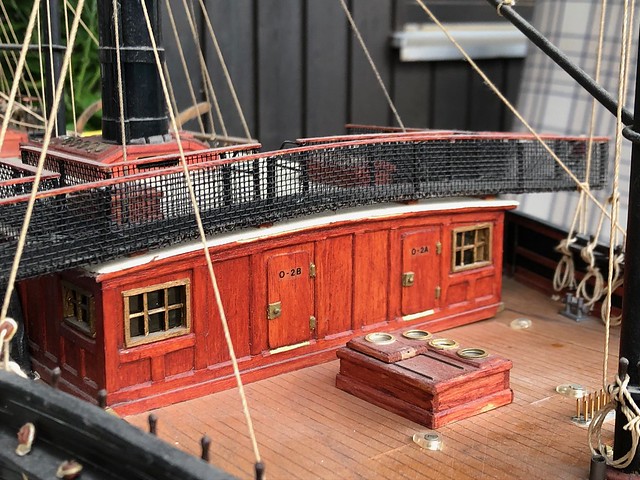 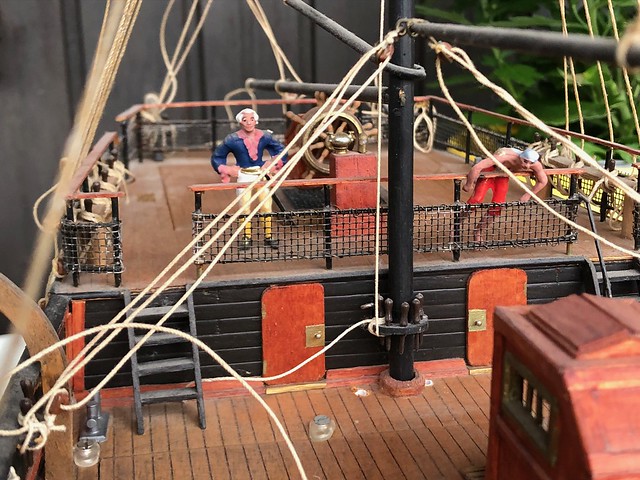 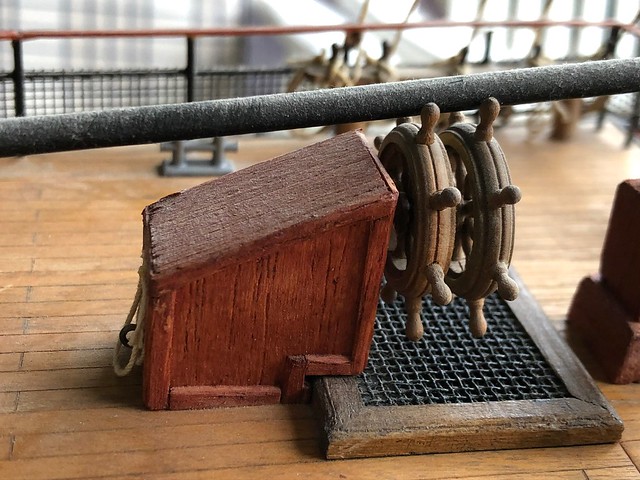 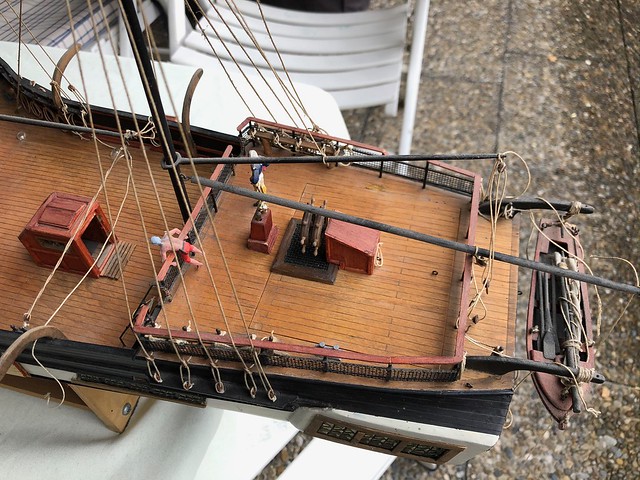 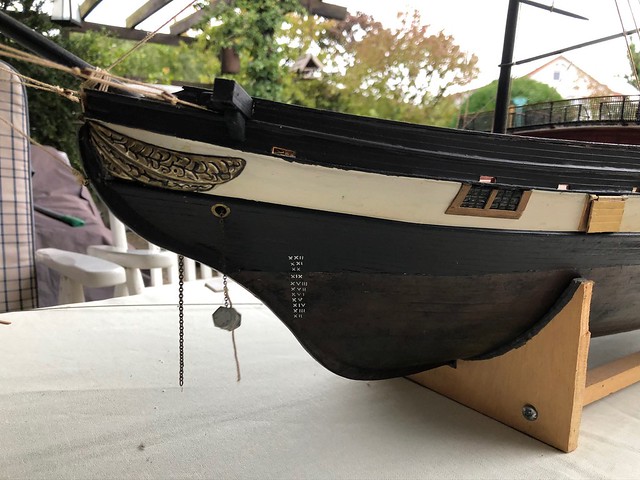 The following pictures show some of the remote control and other components. Now this looks antiquated but back then it was high tech.

I tested her in the bathtub several times. Everything seemed to be OK. However, nowadays I have my doubts whether she would have been really lake worthy, in particular when there are waves, water might enter the cannon ports, and she was quite heavy.

Packing her up for storage

There she was, sitting in a basement for years and she had in fact accumulated a thick dust layer. When I cleared out the basement of my parents from my stuff in September 2020, I had to decide what to do with her. Sell her on e-bay? I sold some remote controlled models before, never got much. Ship to the Philippines for display in our house? We are about to move, so that was not a feasible option. So I decided to pack her up for completion during my retirement and store her in our family storage in Southern Germany.

To protect her I had to make a wooden box. A day’s worth of work.

Other models with cannons

See the video below for another ship with cannons. There is some sound of cannon firing, but sound only.