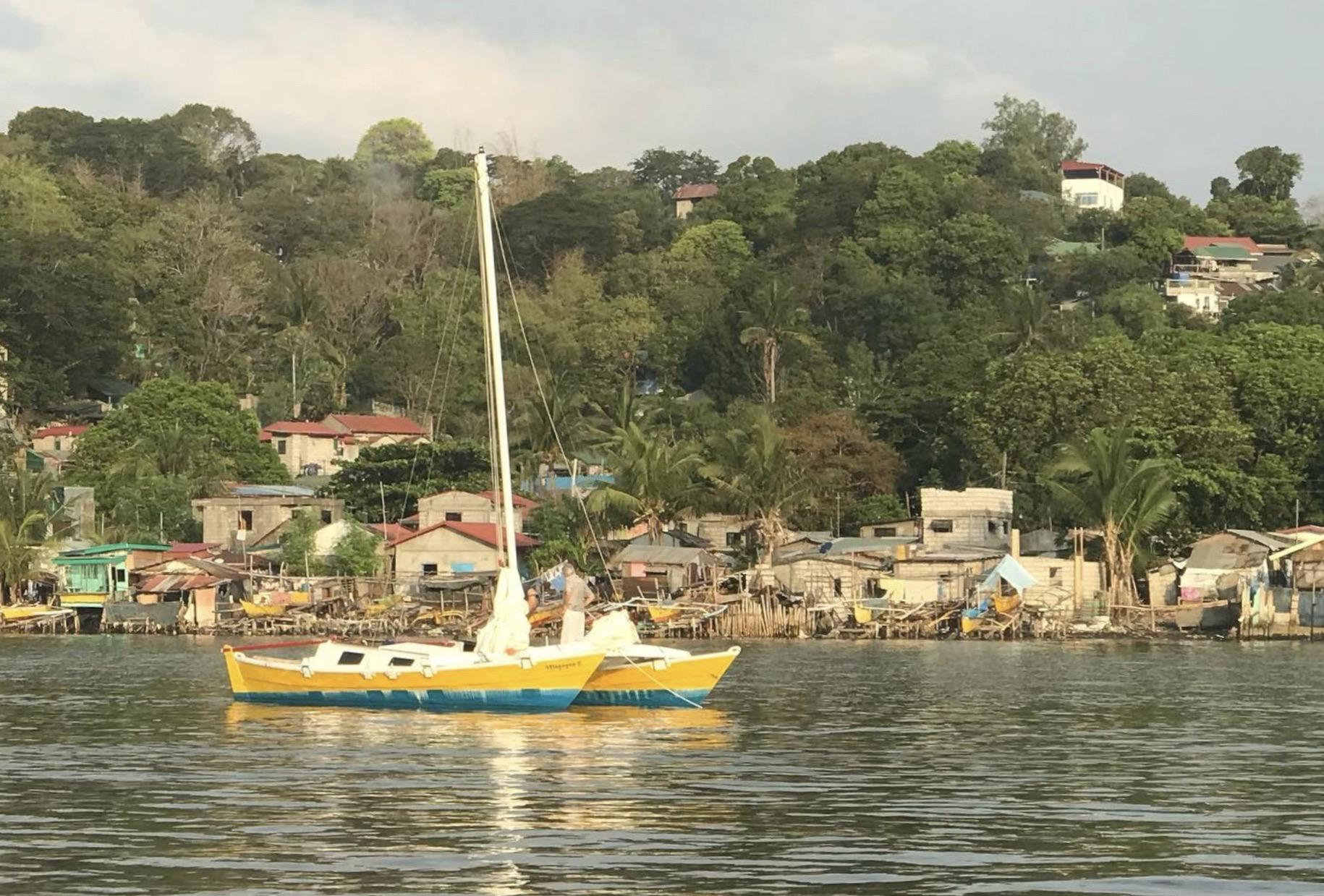 From Puerto Galera to Zambales

In the last two years we had used Magayon II two times. The COVID lockdowns were partly responsible but also Skipper Miriam moving to Zambales, which made it a lot more difficult to just go sailing for a weekend. So we thought about the option of using Magayon II for sunset cruises and day- or overnight tours as an addition to the Sundowners Villas’ offerings, and as a way to generate some revenue and not just cost. Martin’s move from being employed to becoming a freelance consultant also required to cut some cost. Some probing with the Sundowners management resulted in excitement about the idea of sunset tours. A decision was made and in May 2022 we went on a four day journey and moved Magayon II from Puerto Galera to Zambales. Mavic joined the trip by car providing logistical support, Jollibee fast food one evening, and explored new and exciting hotels and resorts on the way.

After a not so early start, leaving Los Baños at 7:00 to pick up Miriam in Paranaque first, and then took the car ferry to Calapan.B

Finally on the way. After leaving the mooring, the bloody motor died. We got a tow from two guys in a dingy from another boat, until we had the sails up.  Left the mooring at 10:27, on our way under sails 30 minutes later. Fixed the motor afterwards.

Day 2: since we started late yesterday and did not get as far as expected, we left relatively early this morning and did quite a lot of motoring, with sail support, to do around 6 knots. With wind only we could only make 3 knots. Passed by Lago de Oro where Mavic stayed overnight – too shallow to stop for breakfast, Nasugbu, Maya Maya, Punto de Fuego, and Papaya Cove. Then had The Rock on starboard while crossing Manila Channel, thinking about strategic plunders of military planners. Arrived in Bataan around 3:00 in the afternoon (Photo)in a terrible industrial port of Marivelles. Fixed the second tank on the way, a wasp had built a nest in the hole of the fuel hose fitting and blocked it. Mavic drove the whole way by car finishing on the historical death march road. She’ll bring Jollybee dinner. Regis is supposed to come later to join the crew tomorrow.

After breakfast Mavic went off the boat and went back to the car. We lifted anchor and managed some sailing but mostly had to use the motor again because the wind failed us again. We passed Subic bay and headed towards the bay at Anawangin, which we had visited before. In the meantime the second tank was getting frighteningly empty, maybe two liters left. It also got close to the evening with only around an hour of sunlight left. Miriam made some calls and ordered some spare fuel. There are three bays in a row, because it got late we checked the first one, but there was no protected anchoring.

Just before the Anawangin bay Regis joined us on a rented bangka with lots of cold drinks, some food and a canister with fuel. We arrived there just before the sun set, checked out a nice corral beach but could not find an anchoring ground without corrals and therefore dropped the anchor at the main beach. It is a party beach, so music all over the place. Miriam and Regis went swam to the beach to check it out and then did some night snorkelling with fluorescence.

With Regis as additional crew member we started the last leg, no wind in the morning, so we started motoring. We also needed to plan for a fuel strop since the canister Regis brought us would not be enough if we had to motor the whole day. So we did a stopover at Pundaquit. Martin stayed on board while Miriam and Regis went for fuel.

But then the wind picked up, we finished the journey with high waves and around 7 knots maximum speed. When reaching sundowners we had to do a small detour to avoid a huge fishing net that some local has installed perpendicular to the beach. We also got stuck on a sandbank at the river mound since it was low tide. With combined motor and muscle power we managed to get the boat off the sandbank and safely into the river.

Summary of the trip

Arrived at Sundowners Zambales from Puerto Galera after 4 days living on Magayon II and covering 145 nautical miles. Sailing 67 miles with an average speed of 5.4 knots. Strong wind on May 16 with high waves, 7 knots max. Day 2 and 3 under motor with 3.6 knots average speed, no wind. Sleeping under the moon and fluorescence in Calaguagin Bay. Should do this more often.

See also the coverage in the Puerto Galera Yacht Club News. (Scroll down to second article)