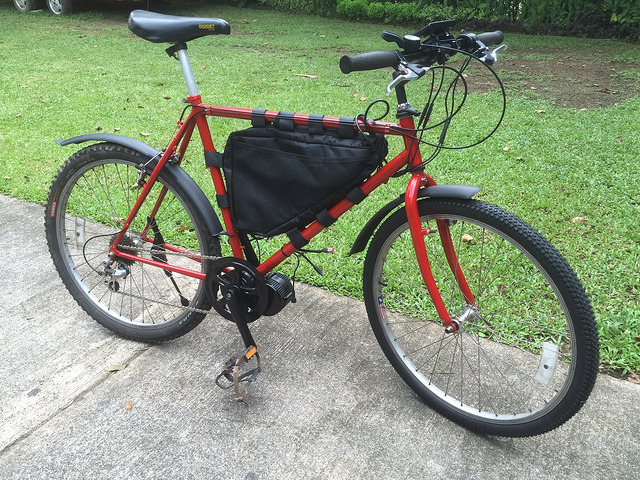 Converting my 1994 Moutain Bike into an E-Bike

After converting Mavic’s old street bike into a Pedelec and riding this for some time on the UPLB campus I got really frustrated during the daily fight with the Jeepneys. It works well, gives you the extra power to get away quickly from any dangerous situation, until your reach 25km/h speed, at which it shuts off the support. This is due to the traffic laws in Germany, which put pedelecs in the same category as Mofas, they can go up to 25km/h and you don’t need a driving license.

Getting the conversion kit

The solution came in the form of an e-bike. Conversion kits for e-bikes are available with motors with different power ratings, and they are not limited to the 25km/h top speed. After some research on the web, I then ordered a new kit, making sure that it would fit in my old mountain bike.

The kit could not be sent to the Philippines because of the new international regulations regarding shipping of Lithium Ion batteries. So I had all the mechanics shipped to Manila while the battery was delivered to my parents place in Germany. There was no way to bring it with me on the way back from the home leave, but after several inquiries with different shippers I found a way to have it sent to the Philippines by sea freight. After those problems were out of the way, the fun could begin.

I bought the bike in 1994 in the Duty Free shop of NAIA in Manila. It is made in Taiwan with a high quality, very light steel frame made from Reynolds tubings and has all Shimano parts for the breaks and the gears. It still had an original back tire. It was still in running condition but you could see the age and the paint of the frame had started peeling off when I cleaned it with a high pressure cleaner. I made sure that the measurements for the bottom bracket were OK and then completely disassembled the bike. Our gardener removed all the topcoat paint using the said high pressure cleaner (Kärcher, from a good old German family business) and I then used sanding paper to roughen up the original primer. It had lasted for 22 years, it will last another 20. A total ‘strip to metal’ job as it is done here often would have rust coming through in the second year already.

A few spots needed treatment for rust, but it was really minimal. Then came the practicing time for me for using the electric spraygun. One layer of epoxy primer and then a finish of dark red epoxy paint, leftover from the Magayon II boatbuilding project. I suck at paint jobs, but the result was not too bad.

Then the exciting bit, mounting the motor

This page is still under construction, please visit us again for updates. 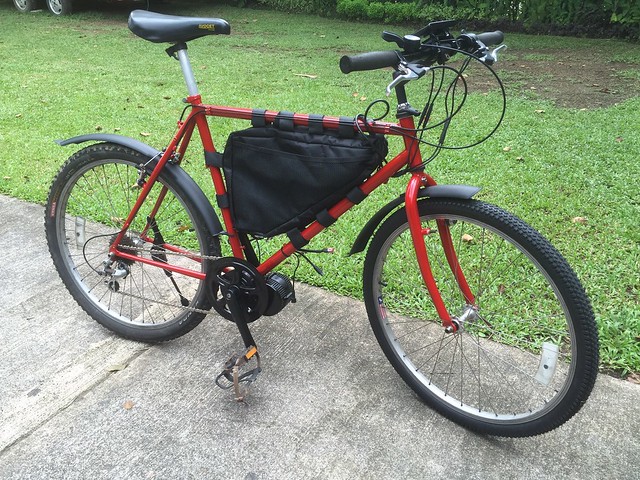