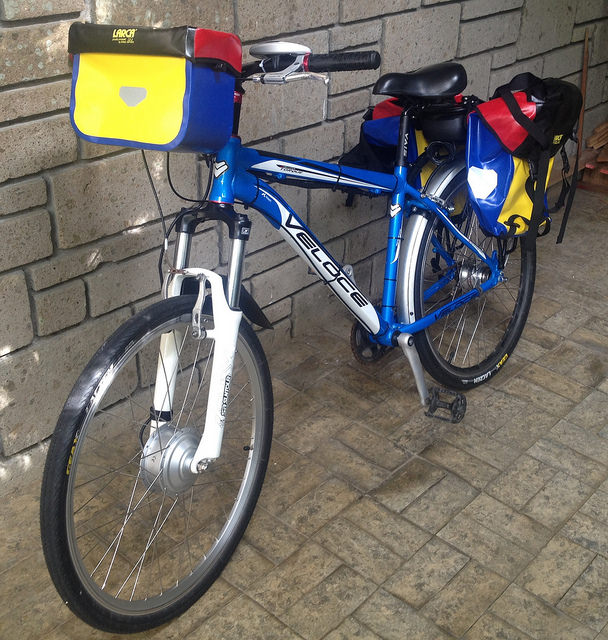 New life for a Street Bicycle

Riding bicycles has recently become a hobby of many Filipinos. Many have fancy custom mountain bike or racing bikes made by local workshops. Cheap electic bicycles from China are now also available at some stores. But there is not much in-between, while in Europe so called pedelecs, traditional bicycles with support from an electric motor, are the fashion of the day.

Because I often take my 20 year old mountain bike to work and end up at the office all sweaty I decided to get a pedelec conversion kit the last time I visited Germany. On each trip to the office I also experience at least one challenging situation with a wreckless car driver, who just ignores the right of way of a bicycle. The idea was therefore to convert an old street bike and to give it some extra power to get away quickly from dangerous situations and to arrive at the office in reasonable shape. For workhout in the evening the electric support would then be turned off and for exercise I would then cycle back home on human power only.

Since I did not know whether the mountain bike could be easily converted I decided to use my wife’s old bike for the conversion. It had a Shimano Nexus internal gear hub in the back wheel with 7 gears, which seemed to be more straightforward for a conversion than the cassette gear of the mountain bike. But I run into problems to remove the bottom bracket in the old bike, I basically ruined it when trying to remove the bracket. The frame was therefore unusable. The local bike shop had lots of new frames, but all were very unsuitable, most were too smal and almost no frame had the holes for mounting a luggage rack. After three trips to the shop during which I tried to match the available frames with the bicycle and converstion kit components, I finally found a suitable Veloce frame. It is made from aluminium, oversized so that it fits me, at the same time not too large so the smaller people in the family can also use it. I also bought a new steering assembly because the old one was rusty and leaking oil in the front schock absorbers. 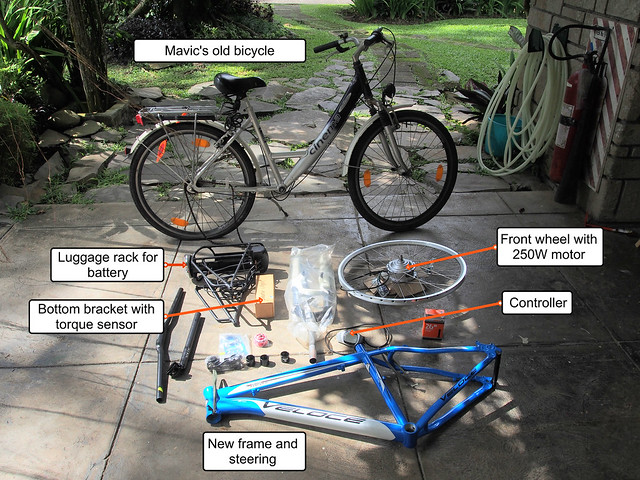 This seemed to be a good starting point and I spent a weekend day to convert the bike.

The conversion kit has 4 major components:

1.) A bottom bracket with torque sensor (photo below)

3.) A luggage rack with provision for sliding in a Lithium Ion battery, plus the battery

4.) A control panel for the handle bar 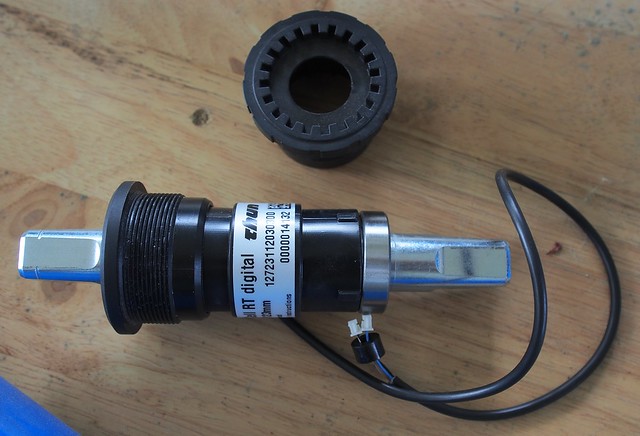 The bottom backet contains a sensor that detects forward or backward movements and also measures the torque, thus the force applied to the pedals. It converts these information into electical signals for the controller included in the battery box. This is quite an advanced system, it not only provides additional power but also adjusts the degree of power provision to how hard the biker peadles. The more effort the rider puts into biking, the more support he gets from the electric motor.  This bottom bracket provides the information needed for this. The system is designed for German roads and therefore only provides electical support until a top speed of 25km/h. One can go faster but relies fully on muscle power at higher speeds.

Because small and large people should be able to use the bike I bought the longest seat holder available. The first step in fitting the pedelec kit was to drill a hole in the frame for the cable from the bottom bracket sensor to exit the frame. The hole should be as high as possible to protect the cable, but it needs to be low enought hat the saddle tube can be fully insterted into the frame without damaging the cable. 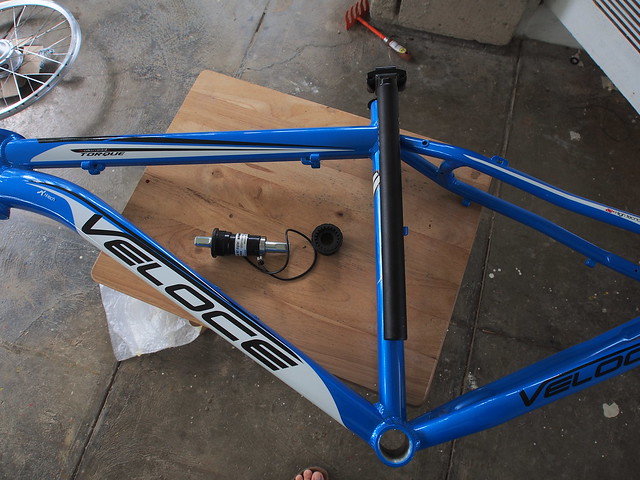 I then drilled the hole large enough for the plugs at the end of the cable to fit through. 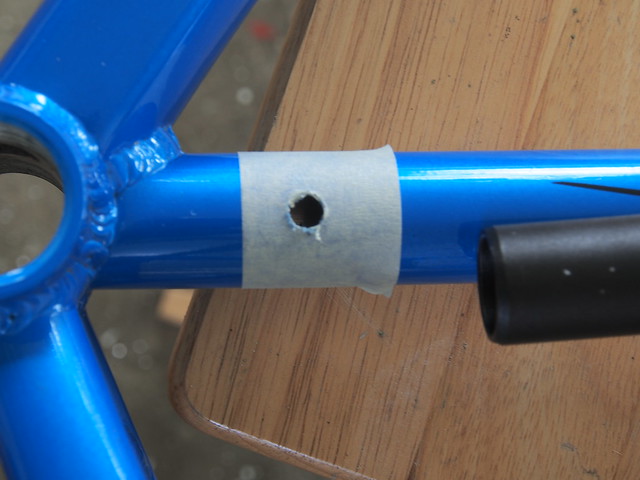 To ensure that the calbe of the bottom bracked does not get damaged the wholes inside the frame need to be burred. I used the sharp blade of a Swiss army knife to remove the sharp aluminium edges sicne burring tools did not fit inside the frame. 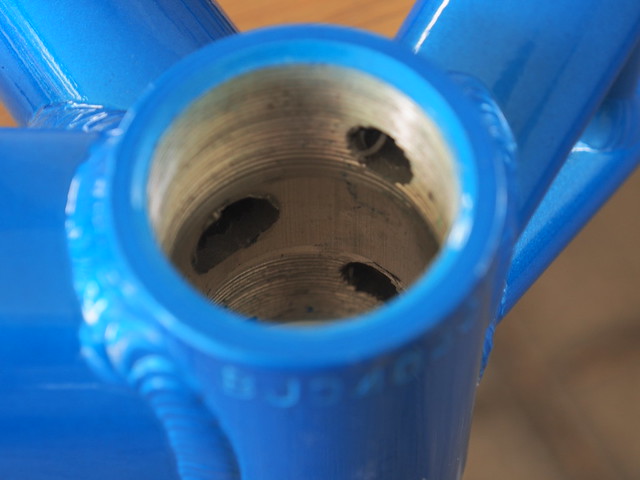 For monting the bottom backet the right tools are needed. This includes a torque wrench (below). 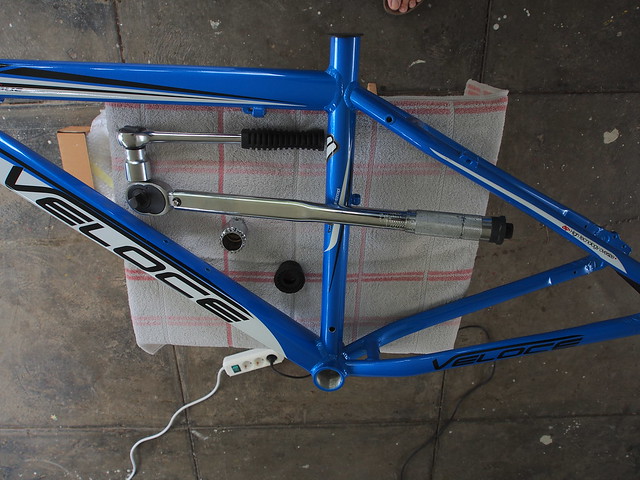 The bottom bracket is then mounted according to the manual. 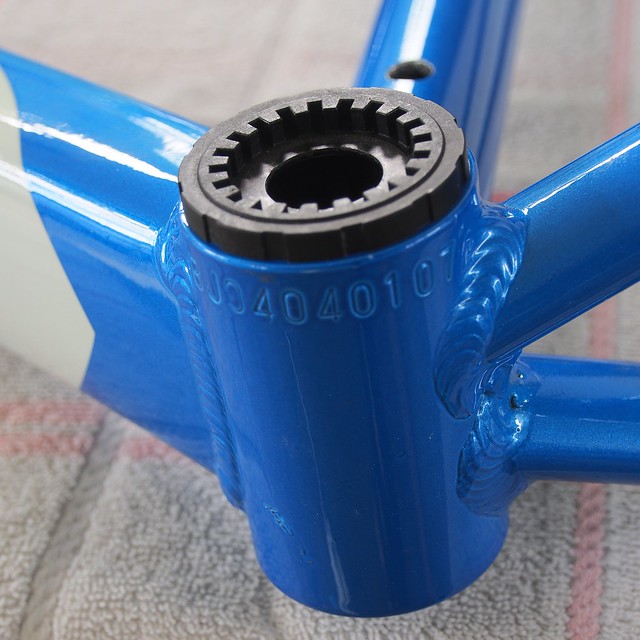 Pedals attached and chain mounted. The cable though the hole in the frame is attached with super glue and tied with cable ties to the frame. 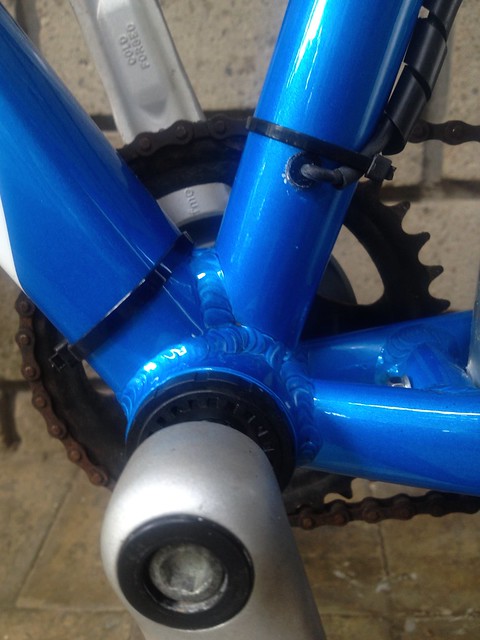 The steering is assembled, all straightforward jobs. 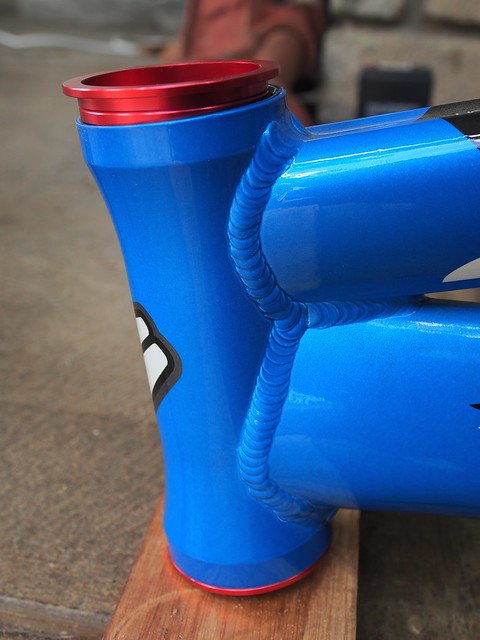 The rear wheel of the old bike has a 7 gear Shimano Nexus internal gear hub.

Saddle is mounted and the luggage rack that also contains the battery fitted. 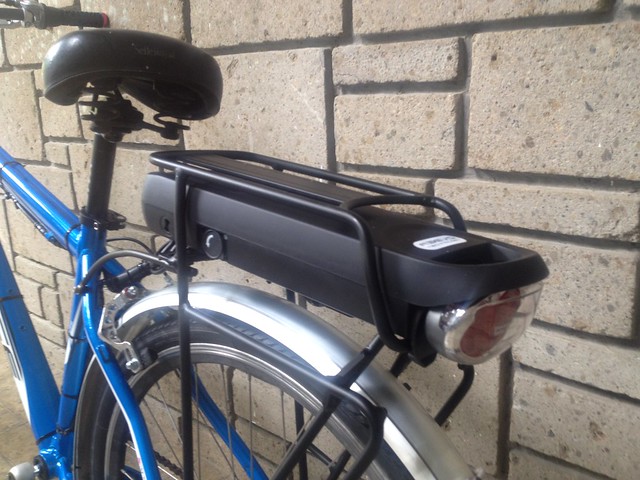 The controller is then mounted to the handle bar. 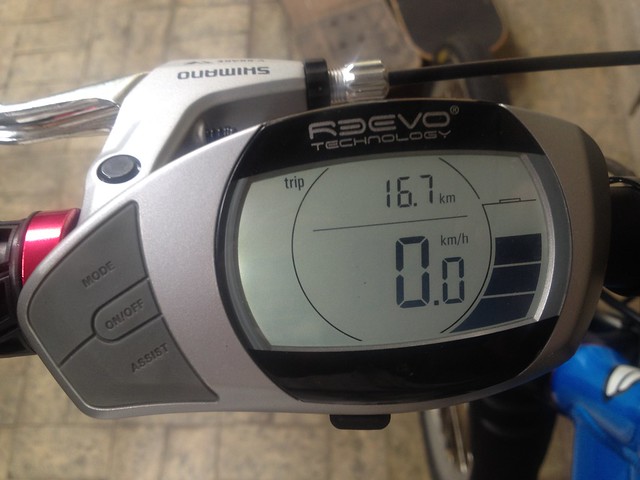 Lacking a frame to hold the bike I used ropes attached to the ceiling to fix it in place while working on it. Lifting the front wheel from the ground also helped to test the electric drive. Below is the final bike, almost finished. 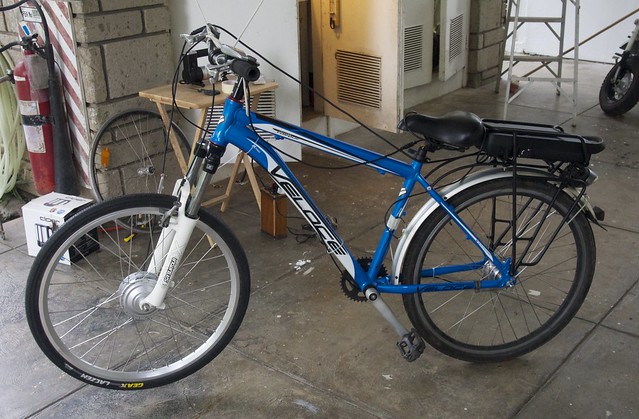 This was also a good opportunity to make use of the waterproof Ortlieb bags we brought from Germany two years ago. Fitting the bracket for holding the front bag was a bit of a challenge because I had misplaced the manual but I found a replacement on the internet. 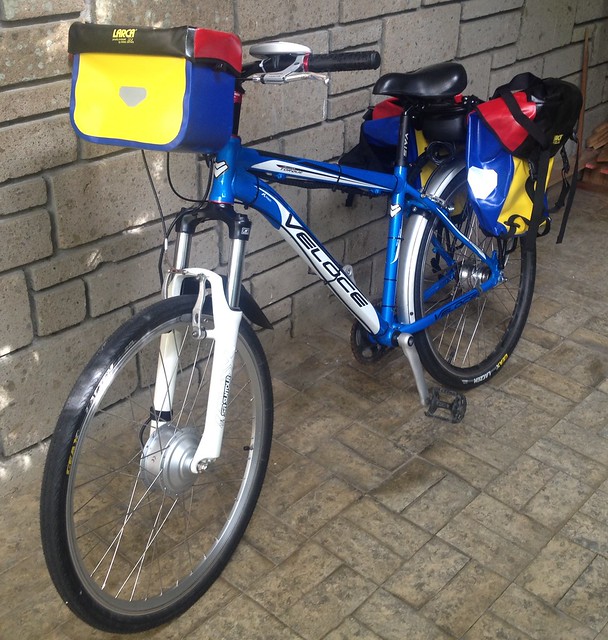 Looks good so far, ready for some serious touring or to bring the laptop to the office during rain.