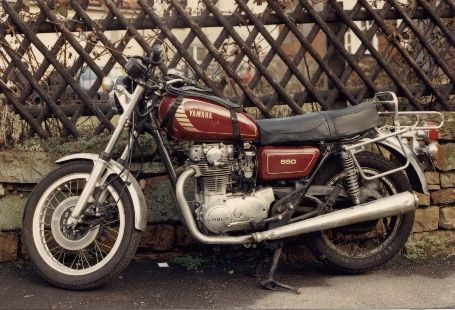 I was in for a bit of disappointment.

The Yamaha I bought because in 1990 I desperately wanted a motorcycle for the summer and because it was cheap. It had the reputation to be a “modern classic bike”.

After riding Kuno’s Triumph Boneville I knew exactly what I wanted. That bike. Unfortunately Triumphs were way beyond what I could afford.

So was, and still is my dream bike

And this is what I got

In the German motorcycle press the XS650 was celebrated as the modern English twin with the engine characteristics of a Triumph but the reliability of a Japanese bike. After not having a motorcycle for some years during my studies in Hohenheim, a house mate offered me to sell me his Yamaha. It was cheap so I bought it.

However, I was not too impressed. In fact I found it quite boring. No vibrations, not as much torque as a Triumph at low revs. I guess my mistake was that I had ridden a Triumph Boneville 750 before and I was expecting something similar, something with more character. The XS650 was just not cricket.

So I only kept it for one season only and sold it quickly.
I hope the XS650 enthusiasts will forgive me.