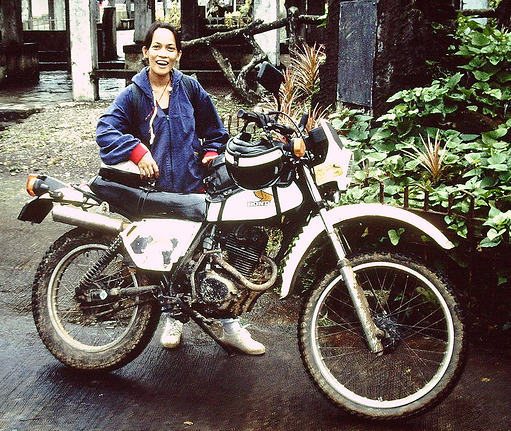 Well, my second Honda. After the first one I had decided “Nie wieder Honda” (never again a Honda).

However, since I could not bring my BMW to the Philippines in 1993, I looked for alternatives, and there were not many.

Because of high import taxes the available big bikes were junk (actually being imported as junk or as motorcycle components). Don´t even ask for spare parts. The four big Japanese companies produce locally – street and enduro bikes up to 125 cc but mainly with two stroke engines. Most of them were street bikes because they can be easily converted into tricycles, which were used for public transport. Only Honda offered 4 stroke engines exclusively, and some time ago they had also build the XL185 – or it came into the country in other ways, but there were a few around.

It was therefore the biggest bike available, which did not have spare part problems. I bought one second hand model year 1980 from a guy in Los Banos. It looked nice since it was freshly painted. But once I had it I realised that it needed some tuning up and once I started working on it I realised that many previous owners with wrong tools had ruined most of the screws inside the engine. When the clutch started slipping just before Easter, I brought it to the local dealer and he put new clutch linings in. We went on the Easter trip and after around 20 km the engine started loosing oil big scale. The clutch also started slipping again. We aborted the holiday and barely made it back – and I was completely fed up. This bike needed some major overhaul before it could be used on longer trips.

The bike before the restoration

So I ended up restoring my second motorcycle from the ground. I took it completely apart, repainted it proplery (not the usual spray can paint job). The camshaft bearing was gone and one of the previous owners had fixed some sort of replacement made out of a copper sheet. I found a solid engine shop in Pasig and had him fitting an oversized piston after a re-bore of the cylinder, had the crankshaft bearings replaced, bought a new cylinder head, new valves and some other parts. After many trips for spare parts, I was good friend with Maria, the saleslady of the Honda factory in Manila. For some reason they had allowed me to buy straight from there although usually only dealers are given access.

Restoring the bike in our house in Greenway

After the engine was rebuilt, the wiring completely replaced and the whole bike had gotten  a new paint job , it was fun to drive. I rode it from 1994 until 1997 when I left the Philippines. We went on many longer trips including one to Mindoro. Actually, for the Philippines the XL was not a bad bike. Traffic is unpredictable and roads are bad so one can not go fast anyway. An Enduro is the way to go. Before the children were born the XL took us around Luzon and Mindoro many times.