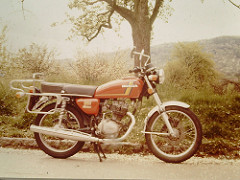 My first own bike.

I bought it new in 1977 and at the time was an apprentice at the Robert BOSCH company in Feuerbach. I had studied all the Motorradkataloge (motorcycle catalog, an annual special of the magazine Das Motorrad) and drooled over all the big bikes. But this was what my account balance allowed me. It only came in one color, orange.

Finally I was old enough to ride a real motorcycle. My first bike, bought on June 21 in 1977, less than a month after turning 18.

It was the only four stroke engine in its class at that time and I did not want a two stroke engine since my brother had a little four stroke Honda Dax ST50 which sounded like a much bigger bike compared to the noisy two stroke Kreidler and Hercules Mokicks of those days. Insurance premiums were according to the horsepower of the bike and classes were below 10, 17, 27, 50 and above 50. The premiums sort of doubled when moving up one class and 17hp was what I could afford at the time from my meager monthly apprentice salary.

I spent all my savings on the Honda and my brother drove me thorugh a rainy spring day on his Dax to the next town Schornorf, around 20 km from home, where I picked up the bike from the local Honda dealer. It felt like heavan, sitting on my very own bike, riding through the forests through the rain following my brother home. Over a year during my aprenticeship training at Robert Bosch GmbH I rode it the 35 km from Beutelsbach to Feuerbach every day, even during Winter when the roads were full of snow and ice. I remember putting my hands in the leather gloves on the engine block at traffic lights to warm up my almost frozen fingers. I did not have enough money to buy proper gear, so I was wearing a fashion leather jacket with buttons in the front with a Norwegian wool sweater underneath, almost freezing to death during winter days. The only gear I could afford was the Nolan helmet, a Rukka rain combi, leather gloves and leather boots.

The Honda was not too bad for learning but not exciting either. Nevertheless it was the star for a while on the local scene because the rest of the gang was driving all 50 cc “Mokiks” and “Kleinkrafträder”. When we showed up on a party it was almoste guaranteed that after a beer or two a girl would ask for a ride on the ‘big bike’ and I would go off with them and disappear for a while.

One summer we wanted do a tour in the Black Forest, but the weather was so shitty that we decided to drive south until we would find some sunshine. We ended up driving all the way to Southern France, it took us 3 days because one bike was my brother’s  Honda Dax with 50ccm and a tuned up engine with 60km/h maximum speed. The third bike was a friend’s Hercules Ultra, also with 50ccm but very sporty and with a maxmimum speed of around 90km/h. In the picture below I am digging in the back wheel on a sandy road passing a wine yard in Southern France.

At some point I got bored with the little Honda. One of my colleagues had just bought an old Honda CB450, which he restored, and which was a real motorcycle. One of the members of our tennis club had a large BMW, I think it was a R90, but I am not sure. He allowed me to drive it once while he was running after me on the little Honda. I needed a change, but did not have any money, so I decided to at least customize the Honda. The first attempt was making it more sporty. I painted it black and fitted a M handle bar.

This helped for a little while, it looked fast, it felt fast, but it was just as slow as it was before. A friend bought a Honda CM185 Chopper. 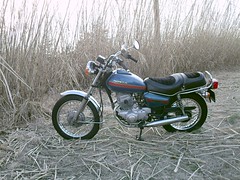 At the same time I saw Easy Rider, so choppers were the flavor of the day. So I went to Schwabengarage in Stuttgart, the main Honda dealer and bought the handle bar of the CM185. I had to improvise with the cables for brake and clutch since I could not find long ones, but during those days every village had a shop with all the components and it was easy to make cables. The whole thing was higly illegal, I should have gone to the TüV and get the higher handle bar registered. They might have objected to it so I did not want to take chances and just rode the converted bike without registration of the handle bar, fine as long as nothing happens but not so good if you have an accident and the insurance company tries to find reasons why not to pay.

I used the Chopper for some time, the picture below shows me, the Honda and the T1 VW Bus that I owned together with my brother at the time on a glider airport on the Schwäbische Alb in Southern Germany.

in May 1979, a few weeks after the picture was taken, I had an accident with the bike while on my way to work. A Fiat driver ignored a red trafic light and hit me on my knee, broke my leg and damaged the bike. For the bike it was total damage, for me 3 weeks hospital and 6 weeks in a cast and half a year on crutches. Since then i hate most car drivers, at least while I am on a bike.

While I was in the hospital waiting for the bones to heal my brother got the junk from the police office, changed the handle bar back to the original before the insurance expert came to inspect it. After getting better I gave the little Honda scrap to my brother, who fixed it and rode it for another few years. I decided to slow down to avoid further accidents and bought myself a BMW R25/2 wreck for 350 DM from a farmers son as a restauration project. I thought I could sell the idea of a new but slow vintage bike better to my parents after just having had a major accident on a motorcycle.

in 1980 my brother and I did anohter major trip involving the little Honda and the BMW, to the Lago Maggiore in Italy during Easter holidays. Crossing the alps during April was quite a challenge because it was freezing cold.

The engine had 14hp, 3hp short of the maximum allowed in the 17hp insurance class. Top speed was around 105km/h, the catalouge of the time promised 120km/h.

When I moved to Asia 23 years later in 1990 I found the same little bike virtually unchanged all over the place, mostly used as commercial bike in tricycles for public transport. In the Philippines, even another 26 years later in 2016 the locally produced Hondas still have the same engines, basically a more than 50 year old design, while in Thailand, Cambodia and Vietnam there are a lot of exciting bikes with modern 4 valve engines and almost twice the power available. The only addition to the motor of my first bike here in the Philippines is an electric starter. This is what a regulated industry does to you.