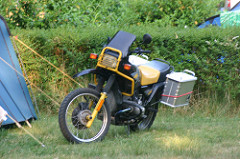 I bought this bike brand new before we went back to the Philippines in 1993. I still have it.

Originally I planned to ship it together with some personnel effects. The tax savings together with a 10% discount from the dealer that he agreed on because he did not have to take it out of the box and assemble it sounded like a good deal.

I worked for GTZ at the time and BMW gave 20% official discount for Germans who worked abroad for the German Government. By exporting it I would also save the 14% value added tax, so I would get the BMW 34% cheaper than it was advertised for.

Unfortunately much later, after I had bought the bike in the box, made it ready for shipping, and had moved back to the Philippines, I found out, that the Institute I was assigned to in the Philippines did not have the right status to allow it´s employees, or seconded scientists assigned to it, to import vehicles tax free. I did some inquiries how to get the bike in in legal ways. It was quite depressing. I would have had to deposit the value of the motorcycle at the customs office until re-exporting the bike. Knowing government offices in developing countries this did not seem like a good idea.

Well, I kept the GS anyway. Every time when we go on a home-leave to Europe I get to ride it and since it is one of the last ones made of it´s kind I am sure it will keep it´s value. Next time I was in Germany I unpacked it, assembled it, and registered it. I did not get the VAT back, but at least I still had the 20% official discount.

Unpacking the BMW in Thomas’ garage and assembling it…

I had bought the GS with some extras, side stand, stone protector and luggage rack. Initially I used a set of very old Krauser bags but I quickly replaced them with aluminium boxes. Trips took me to many places in Southern Germany, the Elsas, Italy, and France.

One of the early homelike trips, on the way to the Elsas 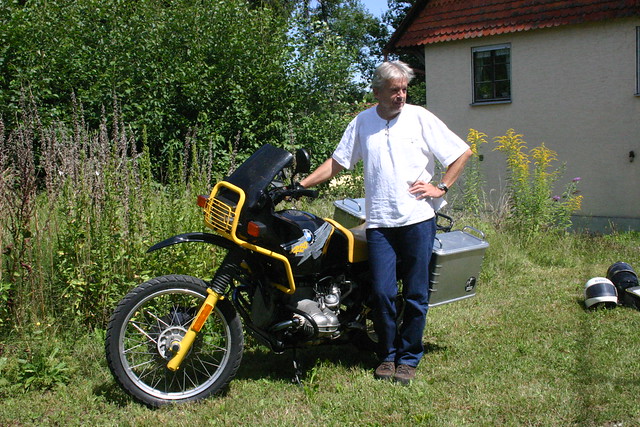 The kids sort of grew up with the bike too. We would often take a car for the family on travel and I would go by bike, with the kids joining on the back if they felt like it.

Bill, a friend from the US, also drove it to Italy and returned it saying it is a monster, he has relatively short legs and always had problems parking it.

The verdict: Simply one of the best travelling motorcycles ever made.