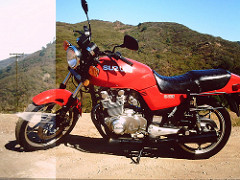 This was not my bike, but almost. Bill lend it to me in LA for two months.

When I went to the US in 1984 I visited my friend Bill in LA and he let me use his Suzuki. I ended staying for 2 months and explored Southern California with the fire truck red Suzuki.

Don’t as what happened with the above picture. Since I originally wanted to go around backpacking and hitch hiking, I had only a small a Minox camera with me.

Yes, and I did wash it, and fix it too, a clutch cable was the only thing that broke though.