The coolest moped Honda ever made..

When I was 15 years old two of my classmates bought themselves Honda Dax mokicks with 50 ccm and a top speed of 40km/h. The Dax was the only four stroke mokick on the German market, which during those years was dominated by the German brands Kreidler (Florett), Hercules, Zündap and a few ‘exotic’ brands from other European countries; Puch from Austria, Garelli from Italy and Peugeot from France. Although most two stroke engines had more power, the little Dax engine felt much more cultivated and even provided the feeling of a much bigger motorbike. My brother bought a Dax too and tuned it up so that it reached a top speed of 65km/h.

One summer vacation started as a short trip from Stuttgart to the Elsas with the Dax, a Hercules Ultra and my Honda CB125J. But due to continuous rain we continued riding south until we reached Saintes-Maries de la Mer in the Camarque in Southern France. The trip along the Rhone valley took five full days and three days back from France to Stuttgart when we took a shorter route through Switzerland. Besides the rider the Dax carried clothes, camping gear, tools etc for a 4 week vacation. The little Dax had already gotten cult status during those days. It then disappeared from the German market for decades with the ST50 to be re-introduced briefly in 1995 to 2000 by Honda. When the patent expired in 1998 Chinese copies started appearing in some shops.

The Dax has foldable handlebars and a gas tank cover that can be sealed. Therefore it can be easily transported in a car and we often brought one along on vacation trips with camper vans. Miriam and Kata took their first own motorcycle ride on my brother’s second Dax (this time with 72 ccm) on a campground in England, until the campground manager put an end to it looking astounded at us and stuttering ‘you…you…you can’t do this…..’. So i was very happy when I saw a newly restored 72 ccm Dax on the www.motorcyclephilippines.com webpage. I texted the seller and it was still available. The next Saturday the whole family had a look, I test rode it and Miriam’s comment was: ‘Awesome. Buy it’. So we did and agreed on 45,000 Pesos. 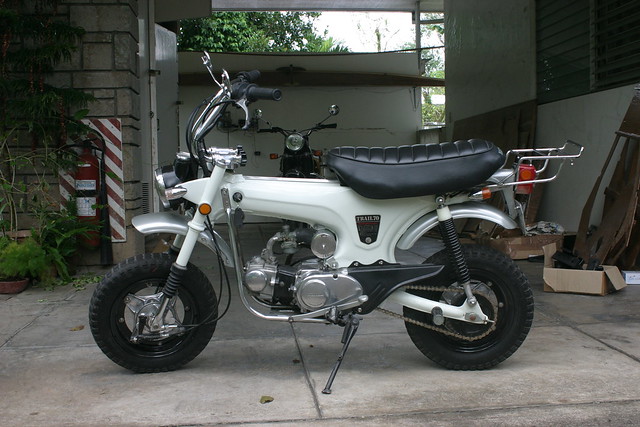 Now we need a ribbon big enough to wrap it for Christmas.