The next step in the epic journey “Sail to Pandan“. Hey, we have a title to defend first!

Earlier this year the plan to finally sail to Pandan got screwed up because we did not have enough time, Miriam had a film shoot scheduled for right after Easter.  We decided to sail form Maya Maya to Puerto Galera instead and to give it a purpose, to join 14 other yachts and compete in the Puerto Galera Yacht Club Easter Regatta, just for fun. To do at least some sailing on Easter. 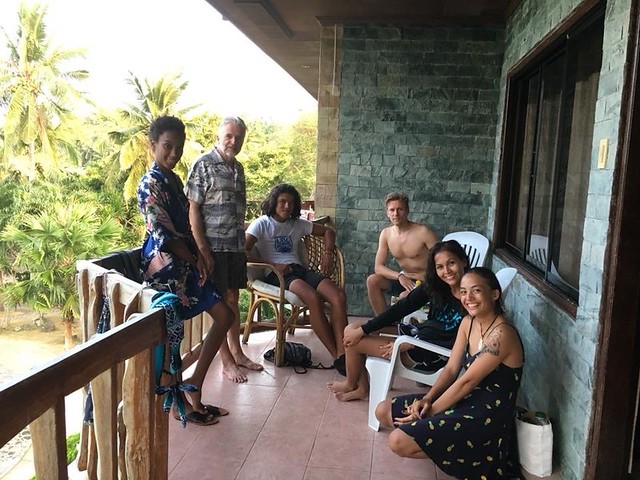 We had great fun, came in second in the multi-hull class the first day, second again the second day, and first the third day. To all our surprise we won the overall first in the multihull class, and then overall first for the whole race. 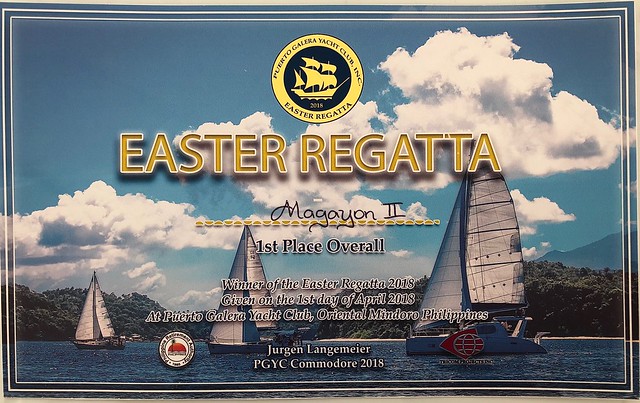 So now we have to defend the title.

Getting the crew together – an email

“The stakes are high. After winning the Puerto Galera Yacht Club Easter Regatta earlier this year we want to defend the title. It is going to be a lot tougher. Adjusted handicap, more international competition, and this time they won‘t mistakenly see us as „being a marker and not competing“.

We are going to race Magayon II again during the Puerto Galera All Souls Regatta from November 2-4. We are happy to announce that we will have Skipper Miriam, who led us to victory on Easter, on the helm again. If you are in Puerto Galera during those days, pass by at the club and support us. Since some of the Easter Champions of Magayon II are not available this time and others have not confirmed yet, there might also be the chance to join on the boat one or another day. I will provide updates on the crew and chances for joining next week.

If you have your own boat, join the race.

We are booked in the Sandbar from Oct. 31-Nov. 5 because it is walking distance to the club. But there are also many other resorts on the many beaches. There is usually a BBQ party at the club on the evening before the race (Nov. 1) and in the afternoon of the last day.”

The new Crew for the All Souls Regatta

This is the Magayon II team, including the crew of the Easter Regatta. Some people have expressed interest to join this time but did not confirm yet, they will be added as we go:

The crew table below will be completed during the sailing days, positions will be rotated. We need a gib sheet monkey (Fockaffe), a buoy finder (Navigator), a beer steward (Smutje) and a diversion officer.

One race can take a few hours. Also it might rain and waves might be high, in which case a lot of spray water will come on board.

Messing about in Boats

absolutely nothing half so much

worth doing as simply

messing about in boats.” (Ratty  in Kenneth Grahame’s beloved classic,

The Wind in the Willows.)

Boats are like barrels without a bottom, you pour money in them and never see it again. Lots of things break, and we also had to fix some problems, like the lashings that came loose all the time. So on October 20-21 Mavic and Martin spent two half days in Puerto Galera to do some basic preparatory work:

Mavic cleaned up the cabins and we removed a lot of unnecessary stuff that had accumulated. 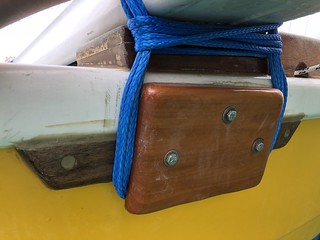 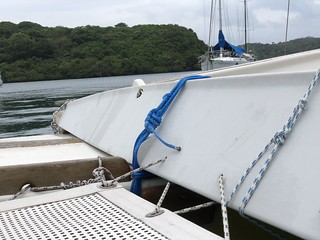 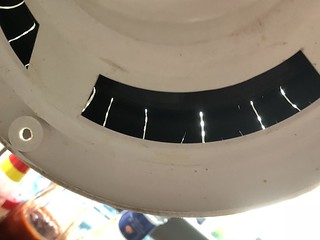 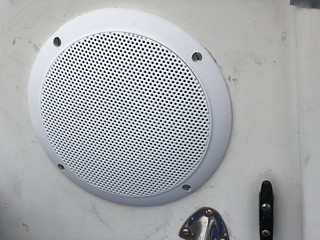 What still needs to be done: Fix the anchor light. Log and depth gauge are not working. Lashings on the outside need to be replaced (need more rope). The fan of the starboard hull needs to be replaced too and then, we need new canvass seats. For the regatta we probably have to put the old white seat in again since I have torn the new blue seat last weekend. We also need to design and make a cover for the lower mast cleat so that the gib sheet does not always get caught in it when shifting sides. 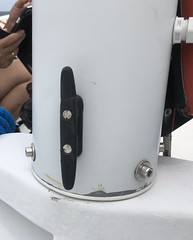 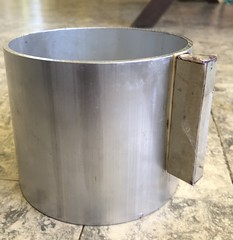 Left: The culprit, a cleat for holding the sail down, usually the
gib sheet gets entangled in it when shifting the gib.
Right: Simulating the cleat at home for designing the cover. 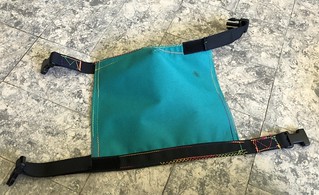 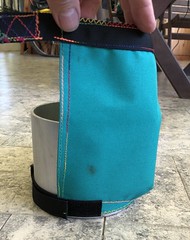 Two days after successfully passing her theoretical exam for the SKS skipper license Merms arrived this afternoon in Manila. She passed the practical exam two months ago and is now certified to be skipper on Magayon II and much bigger boats.

On Thursday, November 1 we took Magayon for a spin to test everything, in particular the new lashings, before the race. Jean and Brigitte and their three kids joined and the kids got some first sailing experience and all motored a bit to get some feeling for the tiller.

Everything was all right, the lashings really tight for the first time.

The rest of the crew, Ina and Shekie, arrived in the evening and we ended the day with a dinner at the restaurant of the Sandbar.

See where Magayon is now