My dad bought a free-flight Hegi Sultan model glider airplane which he wanted to assemble during a family holiday in Holland, but never did. Years later my brother and I assembled it and flew it on the slopes of Baach, with my mother providing transport services with her Volkswagen. Aged 12 I bought the Graupner Amigo and a MiniProp remote control at Concelmann. Building took two weeks, my first remote controlled plane.
I had to get a license for the remote (different days back then). The MiniProp was crap, It often got disturbed by interferences, and i usually crash landed the glider.

Then I bought a small Cox motor with 1.5 ccm to motorize it. Still remember the exciting smell of the rhizinus oil fuel – racetrack smell. Later I fitted an electric motor with a heavy NiCd battery, probably the first electrified glider in the Stuttgart area. It was too heavy for the structure and after pulling up from an accidental nose-dive the wings broke and the plane went rocket like into a vineyard. An obviously shaken wine farmer showed me the way to the crash site, a few meters from where he was working.

Is it childish to want to build another Amigo out of nostalgia? Graupner is offering them again. 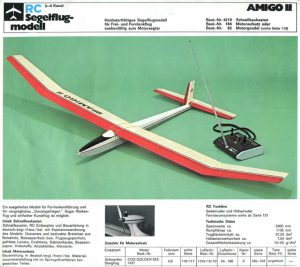 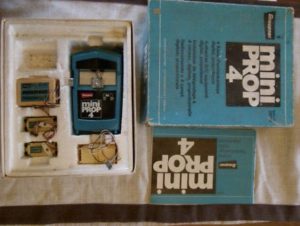