This is it. Finally, 10 years after buying the plans we are going to sail Magayon II to Pandan Island this Christmas.

This is the plan: The Magayon II Core Crew all go to Puerto Galera on Thursday, December 20, 2019, leave the car in Batangas and take a private bangka across. We then pay our bills at the yacht club, and stock up supplies on Wednesday and then set sail for Pandan Island on Thursday. The weather forecast looks favourable, with winds coming from aft until Calavite Passage and then from port until Sablayan, so we should be running fast and able to do it in two days. Miriam, Kata and Martin will sail while Mavic will go back to Batangas, pick up the car, and drive it to Sablayan.

Martin was still making a suncover for the trampoline area to be used when she is anchored so that somebody can sleep on deck reasonably covered from view. The crappy brand new „Heavy Duty“ Singer sewing machine broke again, for the third time, causing some panic. Martin went on emergency shopping spree to Manila and bought a Brother. He finished the suncover late night.

By now all spare and replacement parts were prepared too. Kata had brought a new Clipper speed and depth sounder from the Netherlands. The gaff that had a big crack the last time we sailed was glued back together and reinforced with a big stainless steel screw. Spare rubbers for securing the stays were manufactured and parts for many small improvements prepared.

Miriam had inflated the canoe Butanding and the two kayaks to check them for more disintegration, found some and fixed it with an expired Gerber glue.

We loaded the gear in the car this night. Packing of personal items had to wait for tomorrow morning.

We are ready to go.

A few months ago a Typhoon had knocked down our wooden model boat in our house. The mast broke and some other things. Martin had not had time to fix it. Anyway, luckily we are not superstitious. 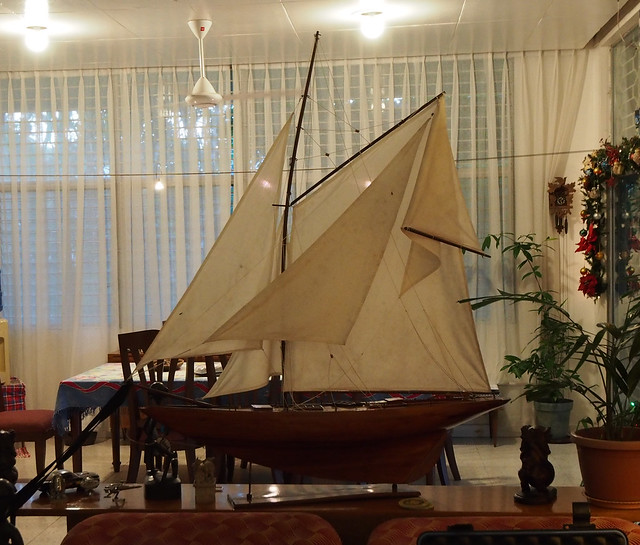 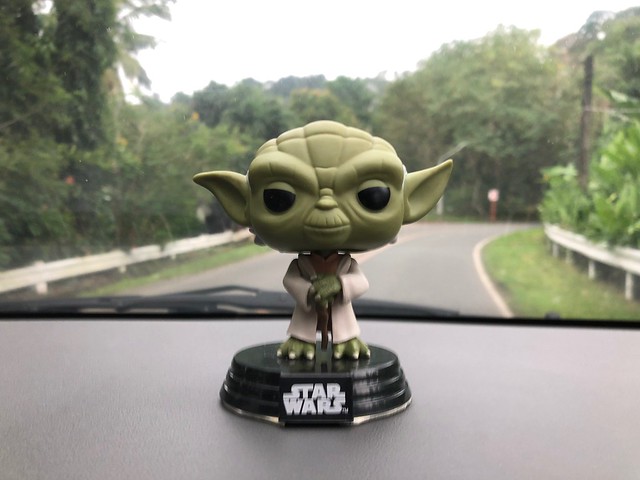 „On the way to Pandan Island, we are.“ 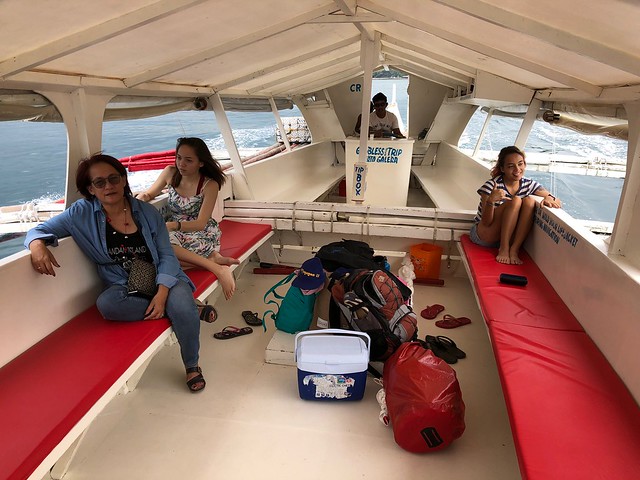 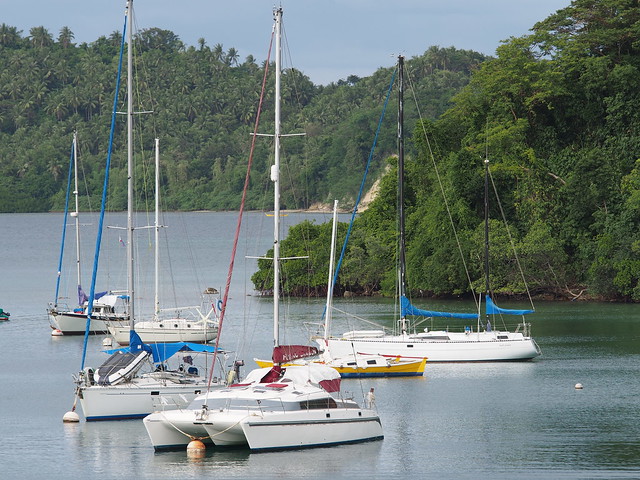 Magayon II waiting for us between her big sisters.

On the first inspection this afternoon we fixed the tiller extension, the safety rubber of the left stays, tested the sunsail for the trampoline and found a leak in the port hull. The speed log sensor tube had cracked and water was entering there drop by drop. Luckily Martin had bought a new Clipper, which includes the sensor.

No masks on board. Miriam had to dunk in the water and work from outside, Martin was working inside the cabin and Kata took the role of the messenger. We managed to swap the sensor after two attempts. After the first water continued leaking. Some marine epoxy, which cures under water, solved the leaking problem. 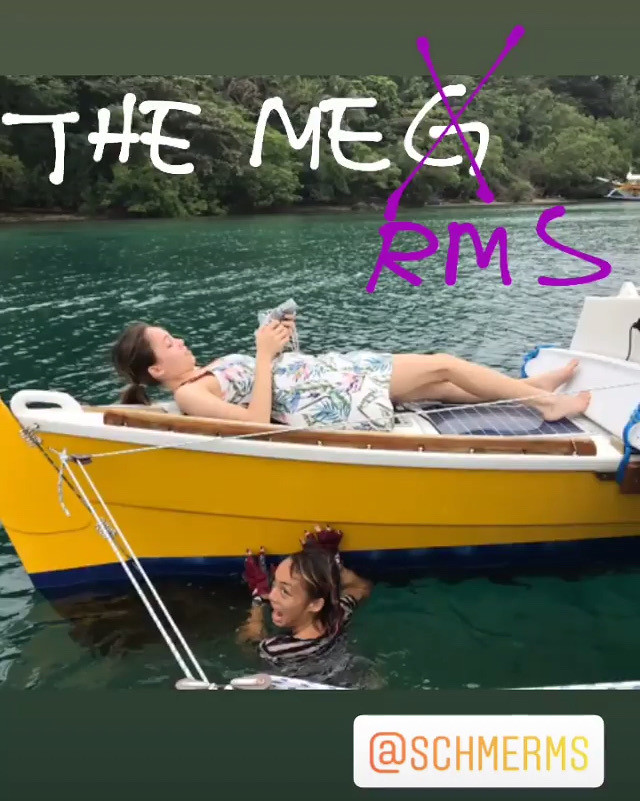 The outer part of the through-hull speed transducer had been broken off (below left). No idea how that could happen. Probably a manufacturing defect. We also replaced the safety shock cords of the stays (bottom right). 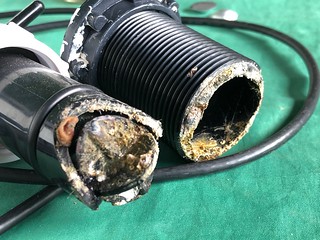 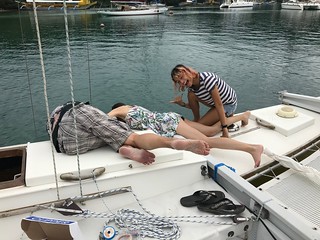 After mounting the new through-hull transducer, the hull is finally dry.

In the evening a trip to Sabang resulted in new sailing shoes for Kata, mask and snorkel for the boat, and a French meal at the former Sunset resort in Small Lalaguna. 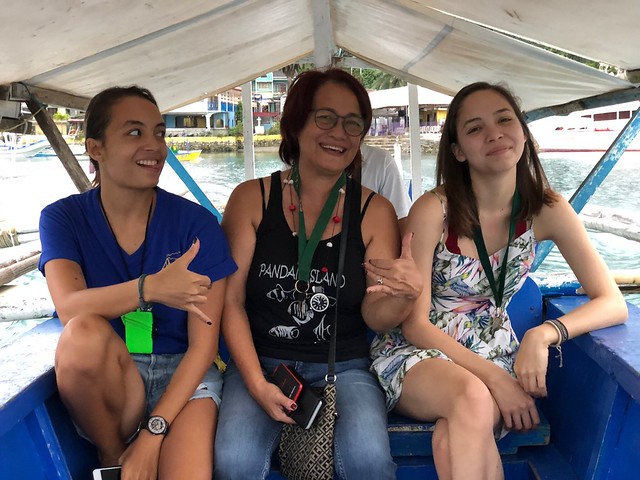 Breakfast at BADLADZ. Maybe the last proper cooked breakfast for the next days?

Division of labor. Mavic and Kata went to buy supplies. Martin and Miriam went back to the marine supply shop for some safety gadgets which are still missing.  The store does not have flares because, according to the expat owner, they are too difficult to get into the country.  They did not have a small self inflating life raft either, so we ended up buying Uschi, a China made life saver ring made from hard, red plastic. „Did you loose your life ring?“  „No. we never had one.“ 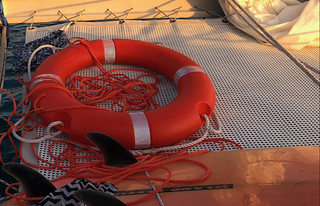 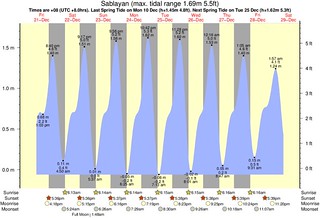 Above: Our new crew member, Uschi, next to surfboard Stormagetten on the trampoline, and tide tables for the next days.

Last we got 20 litres of fuel. The second tank was still reasonably full. Food stored. Both tanks full. Sufficient water to be adrift for a few days if needed, battery charged, we are ready to set sail.

A nice late lunch at the Puerto Galera Yacht Club, and then we all went to bed early, alarm clocks set to 5:00.