Finally we are sailing Magayon II to Pandan Island.

Meng got up early and picked us up with the service boat at Muelle pier at 6:00. It took half an hour to get everything ready. Once we had detached from the mooring and were about to set sail, Mavic was already on the passenger boat back to Batangas to pick up the car and take the RORO ferry to Abra de Ilog. We set sail, and were flying with the wind through Manila Channel out of the Puerto Galera bay westwards.

Everybody has warned us. Calavite point is very unfriendly, strong winds, high waves and strong currents during ebb westwards, and medium currents during tide eastwards. Peter from the yacht club had also asked us how we are planning to communicate there. No cellphone signal coverage, the point is a natural reserve, so only a few remote villages at the shoreline exist.

But we had the wind from aft and the waves were high and not choppy, so it was great fun. The fixed log often showed 7 knots, but the GPS logs (trackimo, IPhone) sometimes showed even 10 knots. This was sailing at its best.

Shortly after Abra de Ilog, which we reached around 10:00, the cellphones indeed went dead. So far Mavic had followed our progress in various apps, but even the Trackimo GPS tracker, which uses the mobile networks to send the locations, stopped updating her.

Around 16:00 we were around the Calavite peninsula the situation changed, we did get cellphone signal again, but now we had the wind from the front and we had to cross the Paluan bay against headwind to find anchorage for the night. We saw a sailboat mast around 4 nautical miles ahead of us around the Maslud point, we liked the idea of having another boat around when staying overnight. Due to the headwind we took the gib down and started the motor. We arrived there after an hour, just to find out, that the huge catamaran that belonged to the mast, was moored there permanently. No crew on board. We checked the coast anyway for suitable anchorage but there was no sandy bottom, just corals, which we did not want to destroy. So we decided to motor further to a bay south of Igsoso Point, there is a small village there and we planned to beach the boat, because Google Maps showed lots of boats on a broad beach. Mavic decided to drive there with the car, it is around 10km north of Mamburao, where she had found shelter.

We had around one hour of daylight left. Four miles to go. It should work.

By now the outboard motor sounded strange, had irregular speed and made more mechanical noise than usual. A quick check, no cooling water at the outlet. Damn. Not again, we just had all the corrosion in the water channels removed only around 20 operating hours ago. Some steam came out of the hole, so some water reached the cylinders. We reduced speed and checked the motor frequently for overheating. As a result it was already dark when we reached the bay. Mavic was waiting on the beach, still 1 nautical mile ahead, and was signalling with the flashlight. We were worried though, to continue running the motor, and about getting the boat off the beach with a faulty motor the next day. The water depth was only 5m, sandy ground, so we decided to anchor instead. Poor Mavic had done the trip to the village in vain.

We set up the boat for the night, raised the sun cover over the trampoline, and Kata cooked a small dinner made from baked beans and wiener sausages. Then we decided to do anchor watch, we were quite far off shore, lots of fishing boats around and our mast top anchor light is still broken. Miriam had the first watch, Martin the second and Kata the very early morning watch. 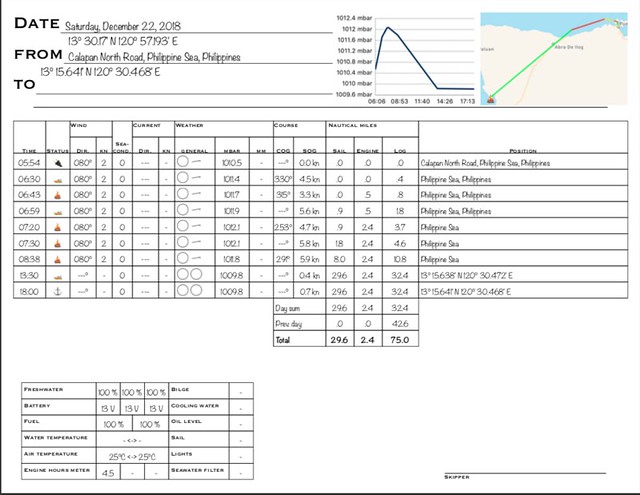 After an eventless night and a simple breakfast we raised anchor, which proved to be a bit difficult. The boat had swayed a bit at night and the anchor rope, as well as the anchor had been caught underneath rocks or corals. We had to overrun it several times to get it loose, luckily the cooled-down engine was running smooth as usual. We then set both sails and course south towards Pandan Island.

Sailing was good in the morning, with the wind coming from port and we made between 4 and 6 knots. Then, at lunch time, the wind dropped to zero, and stayed like that for hours. Initially we were just waiting for wind, but then we started the engine, ran it for 10 minutes, and then killed it to let it cool down. The day was passing and we had still lots of miles to do to reach landing.

Then too much headwind

Then, around 15.00 the wind shifted and was now blowing quite strongly from the front. We started tacking but realised that we would never reach Pandan at daylight. Drastic situations call for drastic measures. We removed the top of the motor, filled the bucket with water, and Martin poured a cup full of water over the cylinders every minute, carefully making sure that the water did not reach carb and ignition components. This seemed to work reasonably well, the motor stayed cool enough for us to reach Pandan just before sunset. On Radek’s previously provided advise, we anchored in the shallow turtle grounds and the dive catamaran Bayawak picked us up, just im time for sundowners at the Pandan Island bar. Mavic had been there since early in the morning already.