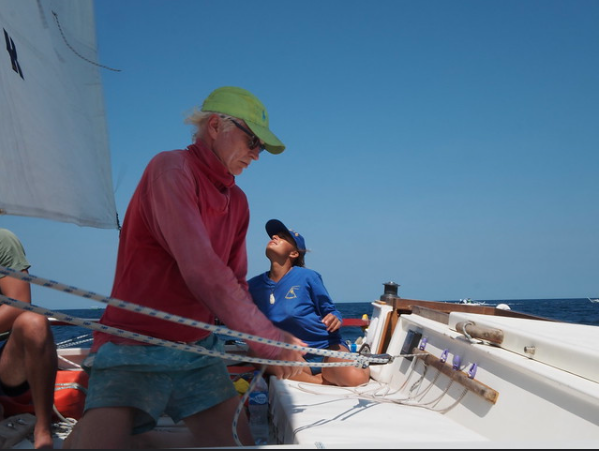 So finally, three months later, Magayon II is on her way back from Pandan Island to Puerto Galera. (see also the Skipper’s Log)

What happened so far

Before Christmas 2018 we sailed Magayon II to Pandan Island to spend Christmas and New Year there. Sailing first with the Amihan and then on a reach it took us only two days to get to our dream island. There we got shipwrecked when during a storm a dive boat’s mooring line broke and it hit Magayon II. After a hectic rescue operation we ended on Pandan Island’s house reef with several damages, among them a broken rudder and a hole in the port hull. Emergency repairs were made and on January 2, 2019, we attempted to sail her back to Puerto Galera. We still had to go against Amihan and took the southern route but after the main sail broke and the pretty unreliable motor gave us some headache, we abandoned the attempt and returned to Pandan Island.

Miriam stayed on the island safeguarding the boat, helping out in the bar, resort and dive shop, doing sunset cruises for islanders and doing her Dive Master. 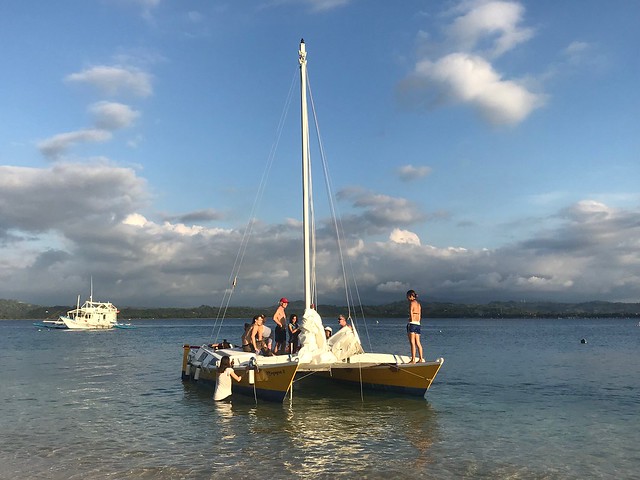 End of March the winds had settled a bit, currents were favourable, and the next Puerto Galera Yacht Club Easter Regatta was fast approaching. It was time to get Magayon II home. Two Pandan Islanders, Radek and Gael had volunteered to join the adventure.

It is time. Easter, and with it the Puerto Galera Yacht Club Easter Regatta are quickly approaching. So this morning, Magayon II with a new crew with Merms as skipper and Radek and Gael was raising anchor, setting sails and started heading North.

The winds were favourable, coming from the West for a change. The crew has abandoned the heavy 15 hp motor and swapped it for the old 8 hp motor. Of course that old nasty thing created problems again, but the seasoned shipmates fixed it quickly.

Nirod meant well and Magayon II was flying often with 7 knots. In the late afternoon the crew arrived at a river south of Mamburao. They found a nice place in the river mouth and dropped anchor there.

They found a nice place in the river mouth and dropped anchor there.
Gael was sweet talking a local man to donating two fish. So we assume a delicious dinner was prepared to be enjoyed in the nice tropical sunset. 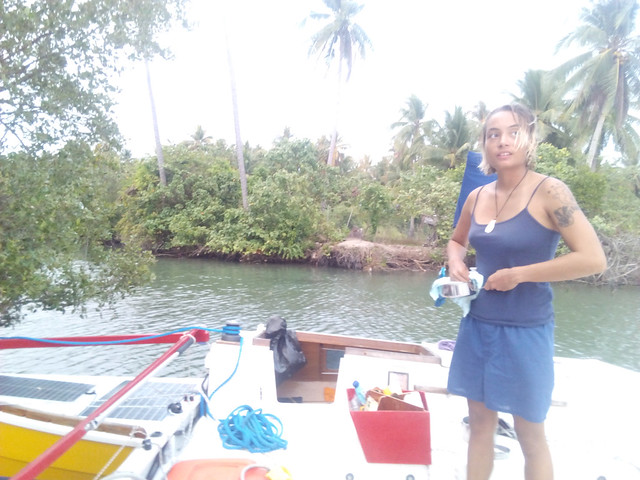 A beautiful anchoring site, if it would not be for the mosquitos.

2:00 am. Mavic and Martin leave Los Banos . Marine insurance was secured yesterday, so in case the ferry goes down we are safe. The plan is to be in Batangas for the first ferry, and in Mamburao at lunch time. By then Magayon II will probably be already heading North. We will join up in the evening and then begin the dreadful sail around Calawite Point on Saturday early morning.

Note from the Yacht Club: “Columbus, a 40 ft dark blue steel hull yacht with red sail trim, left Coron yesterday.” So with some good luck we might meet her on the passage (is a boat with a male name still a she?).

The weather report looks good. Nirod seems to be on our side.

10:00 am. We made excellent progress and got the first Ferry to Abra. It then turned out that we would be by car at Mamburao before Magayon II. A quick SMS exchange with the crew, and a decision was made to fill up the second fuel tank in Mamburao and we agreed to meet at a small bay with a pier around 5km north of Maumburao. We had just arrived there by car when we saw Magayon II entering the bay under motor, no sails set since there was no wind. 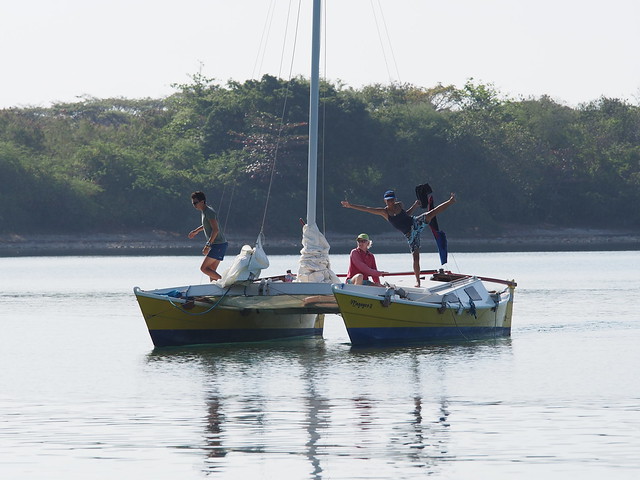 Around lunch time, after getting fuel, mangoes and some more water, Martin hopped on board and started motoring north. First there was hardly any wind. The crew raised the main to at least get some shade. Then the wind picked up and after 30 minutes were were sailing. We had westerly wind, ideal for our course, Amihan obviously decided to give us a break. Around 4:00 pm we had reached the light tower at Calawite point.

Around 4:00 pm we had reached the light tower at Calawite point. This was the last protected bay and we briefly thought about staying overnight, but the weather report was announcing Amihan for tomorrow so we quickly decided to keep going until Abra de Ilog. The wind dropped again, so the motor had to be restarted. Radek suggested to swap the tanks before it got dark, a good idea since with the second start the motor died after two minutes, and could not be convinced to restart. So Radek and Gael did some systematic error checking, removing one component of the fuel supply after the other, and found some problems in the shutoff valve in the connector for the fuel hose. Soon after the motor was humming again. 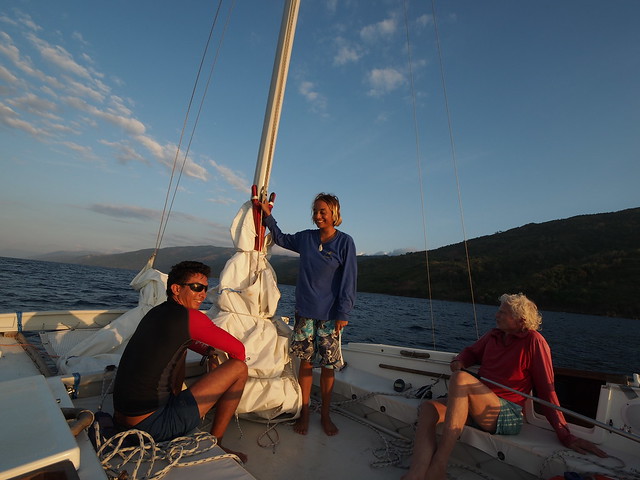 Soon it got dark, pitch black, so to say, since there was no moon. The navigation light on the mast top did not work. Each of us had a flashlight and we periodically used them to scan the see for boats and fishing devices, just to be blind for seconds afterwards. Some fishing boats came quite close before they showed their lights. After some wiggling of the electrical connector a miracle occurred and the navigation lights came back on, although they stayed only on when the cable was held in a certain position. But, better than no lights.

We arrived in Abra de Ilog around 10:00 pm. It was still pitch black, so with the nautical chart and Apple Maps, and listening to the sounds of the waves braking on the sandy beach, we anchored in around 5m water, off the shore of Abra. Luckily Nirod still liked us and there was no wind, so after a nice dinner with canned camembert, rice, some self baked bread, liver pate fruits and the price bottle of Tanduay from last year’s Easter Regatta we all went to bed without anchor watch.

Mavic had in the meantime driven to Pandan Island, picked up Miriam’s leftover belongings and the 15hp Outboard motor, and moved on the San Jose, where she stayed overnight.

Martin woke up from the engine humming at around 5:00 in the morning. Still no wind, so the first leg, until White Beach, no sailing. As we reached White Beach and thought about getting close to have a look, Amihan finally picked up, now blowing from straight ahead. The sails went up and tacking against the wind was the call of the hour. It took a long leg out towards Chicken Feather Island, and back to get close to the entrance of Manila Channel. 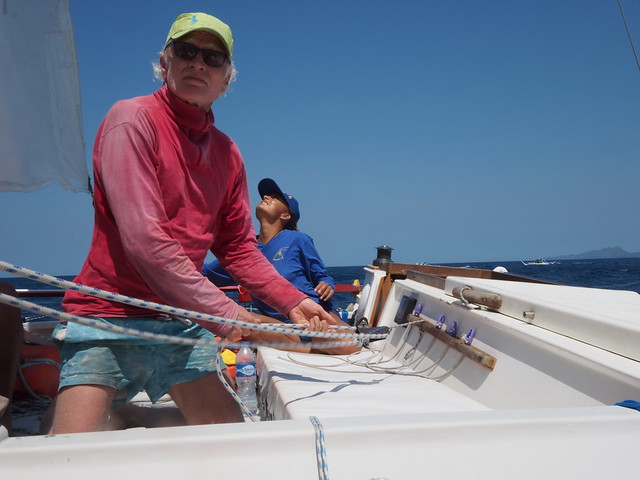 The crew decided to tack into the channel, against the head wind, meaning tacking every 30 seconds. The many bangkas carrying tourists and not knowing about right of way rules did not make things easier. 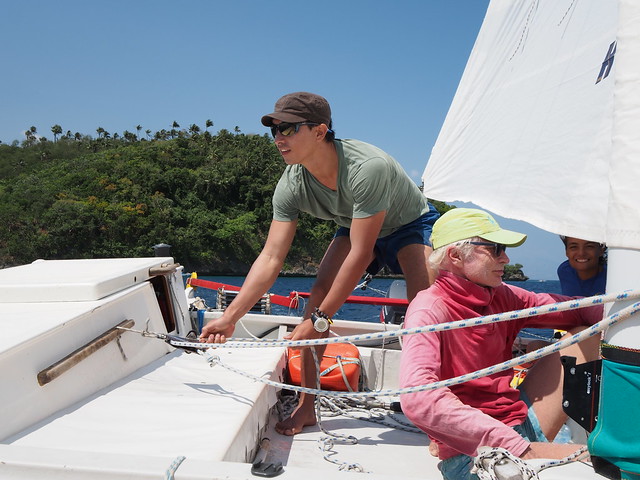 We arrived in Puerto Galera in front of Muelle Pier before lunch time. Our buoy was still available and Meng, our boat boy was too. After attaching the mooring and undertaking just the bear necessities we called the service boat and went to the Yacht Club for a very well deserved brunch. 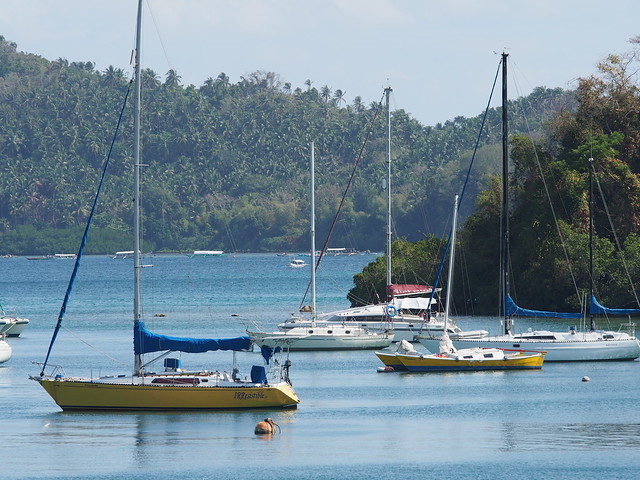 We made it. In three days from Pandan to Puerto Galera, instead of the anticipated six days. So that meant we got three days for doing things we always wanted to do but did not find the time to do. Nice.

The day ended with a very nice dinner in the Fishermen’s cove. Excellent Pizza, highly recommended. Unfortunately they are already full for Easter, otherwise we would have made them our base camp for the Easter Regatta.