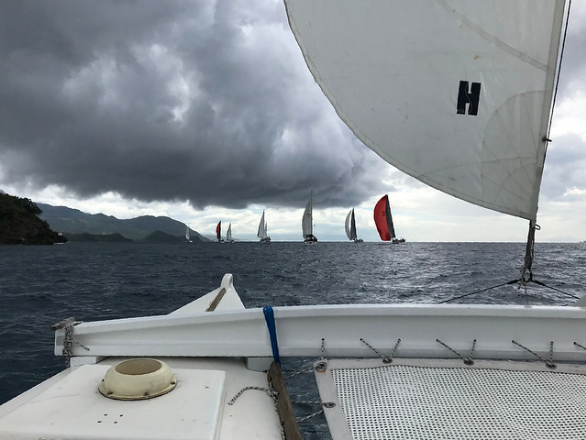 This time without Skipper Miriam.

Magayon II in best shape, with repairs and improvements done and new anti fouling, can we repeat previous racing successes?

After four months out of the water at the boat yard of Papaya Cove for repairs and a new anti fouling, Meng and skipper Jose had sailed Magayon II back to Puerto Galera five days before the Regatta. Martin had advertised the need for crew on Instagram and by email. But out of three originally interested in joining, only Gael could make it. He was touring around the Philippines and on the way back from Sagada participating in the regatta fitted his schedule. His crewed with us previously on our failed attempt to circumvent Mindoro and also when transferring Magayon II back from Pandan Island to Puerto Galera. So with him as foredeckhand, Mavic as supplies officer and Martin as skipper we not only had a boat in top condition, but also should have an experienced crew.

Martin had to work in the morning so we miss to ferry to Balatero and have to take the one to Calapan. We pick up Gael on the way in Calamba.

Thunderstorm in Batangas bay. On the way to the 3-day PGYC 2018 All Souls Regatta. Rain forecast for the next three days. Who cares. A pre-condition for being crew on our Wharram Tiki 26 Magayon II is the willingness to get wet. Usually we have the smallest boat in the race. 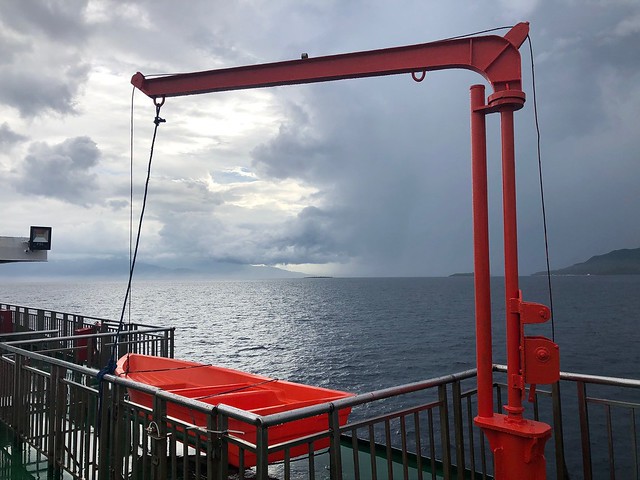 Meet and Greet at the yacht club. We exchange news with Skipper Kareem from Soniya about common friends and their party lives, and about boats. Soniya also has new anti-fouling, Kareem did it after pulling the boat up onto White Beach. So there goes our advantage. Kareem has a crew of 14 people, not all of them would need to join. We offer to take some on our boat, if they are willing to get wet and live without a toilet for a few hours. Does not seem like an attractive offer, so we remain a crew of three.

We leave Henry’s place, where we stayed overnight, early since we have not seen the boat and also need to get supplies and fuel. Skippers’ briefing is scheduled for 9:00. Breakfast in the yacht club. After that Martin takes the service boat and quickly checks out Magayon II – everything seems fine. Then buying fuel (Martin and Gael) and stocking up supplies and ordering packed lunch (Mavic). Henry, our landlord, also joins the first day’s race on Columbus.

Skippers briefing at 9:00. Medium wind from south-easterly directions, current from west to east, little waves and rain expected in the afternoon. Today’s course: Verdi Island and back. Nice, the current will help us today since we are not good at tacking agains the wind towards the island. Start time for Magayon II: 10:30 together with Irresistible and Aragon.

We were on the boat early enough for Mavic and Gael going for a swim while Martin prepares Magayon II for the race. Quick panic since several fittings were mounted the wrong way around after the paint job, but there is enough time to fix those.

Best run to Verdi Island ever. We only tack twice. Wind and current are very favourable. We are second around the buoy after Aragon, just 10 m behind. Kareem catches up on Soniya and overtakes us on the way back. Some racers overtake us too, most of the other boats in all there classes have their spinnaker up on the way back. Maybe we should get one too, or a genua. Aragon was first around the buoy at Verdi Island, but on the way back we leave her way behind. Kerida and another kat are way behind at the finish line too. 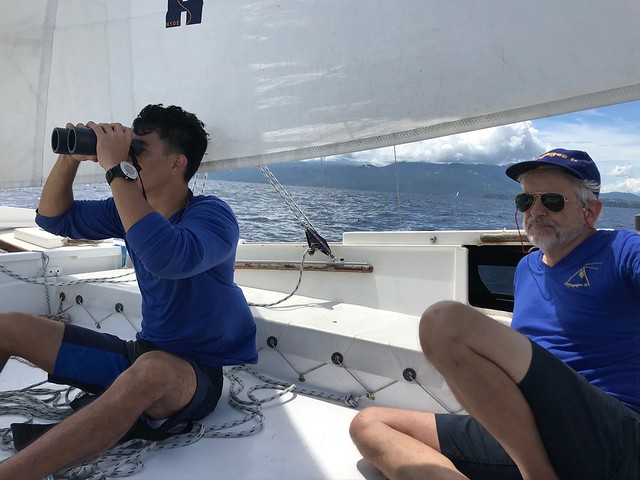 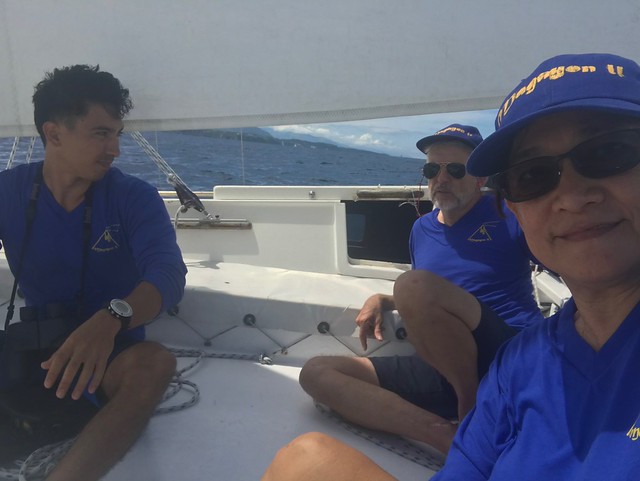 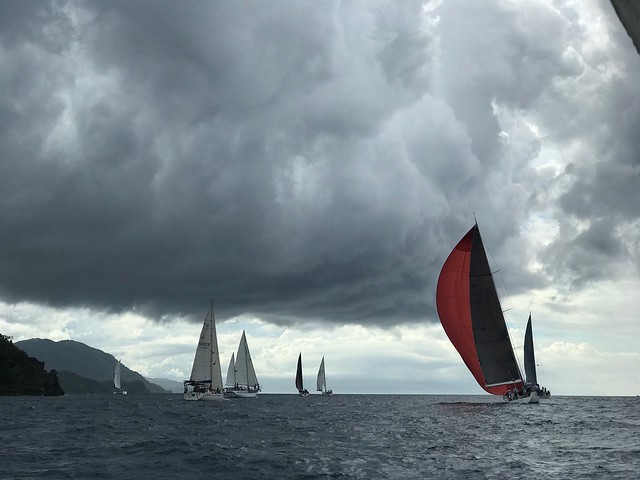 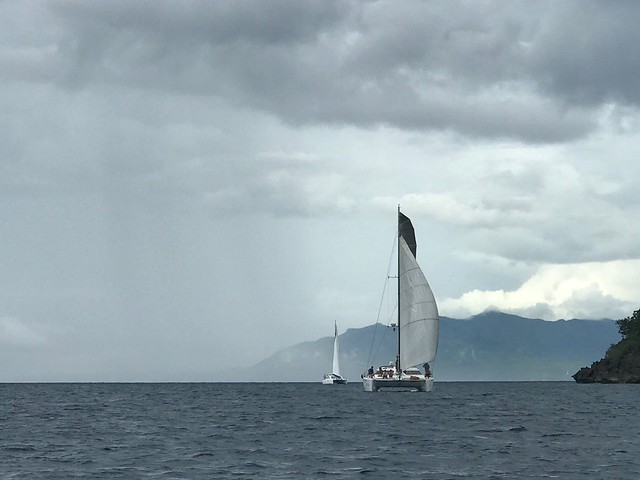 But despite the excellent sail, the big French 64 ft racing trimaran Lacota beats us all. 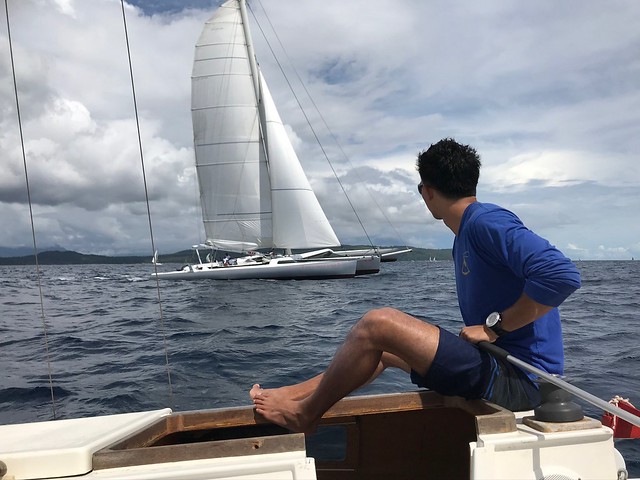 The Score of today 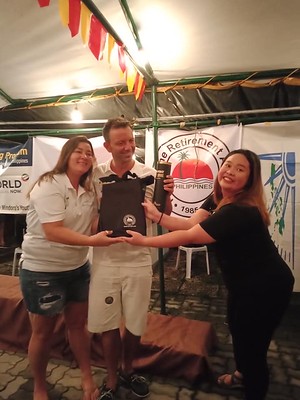 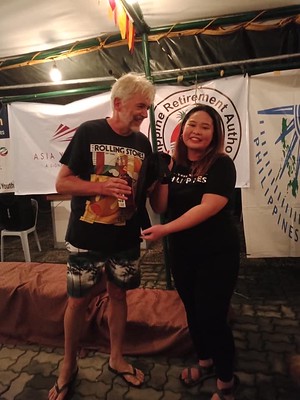 The only down side today: We had a problem with trimming the main sail.

View from our apartment: 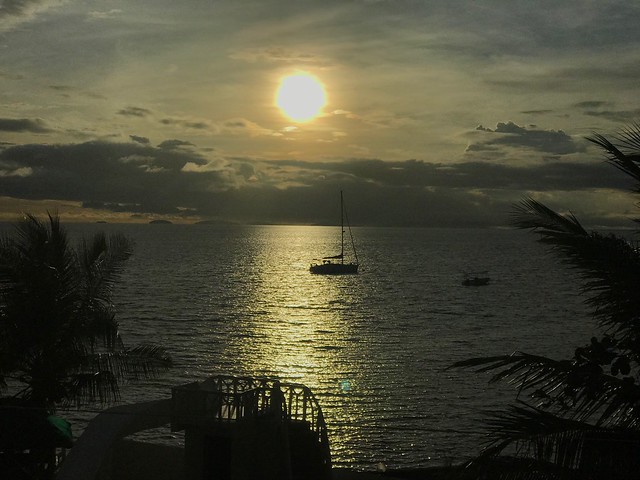 Croissants and coffee at Captain Henry‘s place. Skippers’ briefing at the club at 9:00. We were very pleased, no, we were very excited. The course today is going around Chicken Feather and Bonito Islands. Usually our fastest course. In addition, today the current is going in our favour, from West to East, so this would help us to avoid tacking at the end before the finishing line. This is our chance to win a race. During the skippers’ briefing, Peter, who is sailing on the yellow coloured Irresistible said: “Remember, no overtaking of the yellow boat today!” Magayon II‘s start time is again 10:30.

We are on the boat in time to make some adjustments, tightening the lashings that hold the boat together. Also switching the gaff halyard for better trim-ability of the main sail, and taking the main lower so that there is more room on the top of the mast. Another block, of the main sheet traveler, needed turning around. And the traveler line was twisted so this we fix too. Then it is time to go out. 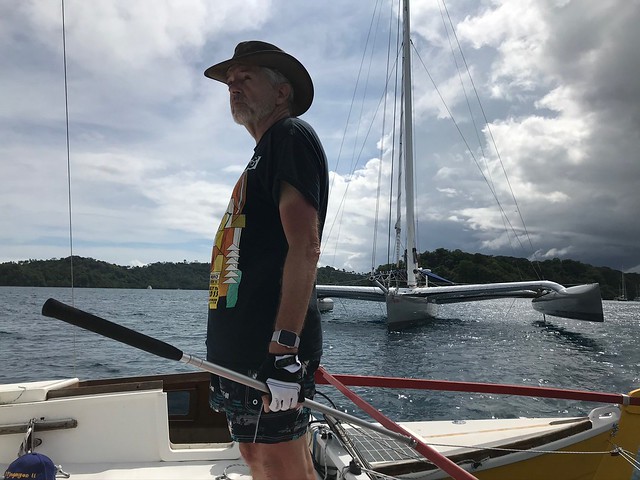 We have a good start, only around a minute late, and overtake Aragon in the channel sailing butterfly. When passing Irresistible we shout over to them “Remember, no overtaking of the yellow boat!”. The laugh and Irresistible is zooming away but the racers have a different course, around Verdi Island and back, so no worries. We cross the channel fast, as usual, with good speed between 5.6 to 7 knots. Aragon is initially following close but we get more distance between them and us with every mile. We are already three quarters across the the channel when more sails of our competitors appear in front of Balatero. We go around Chicken Feather island and then butterfly west towards Bonito Island. At this point the first pursuing catamaran, Soniya reaches Chicken Feather Island. 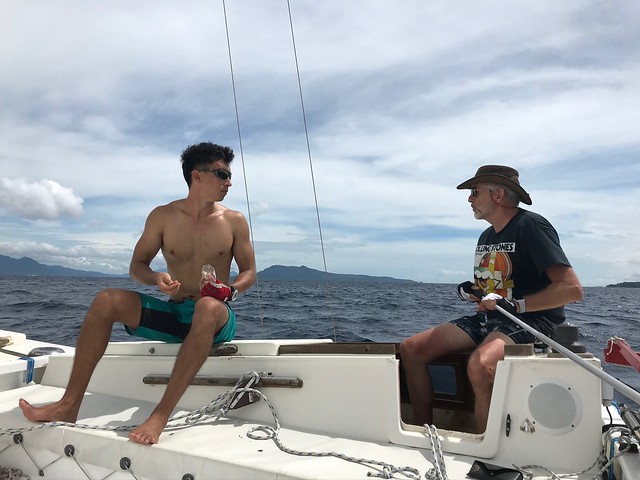 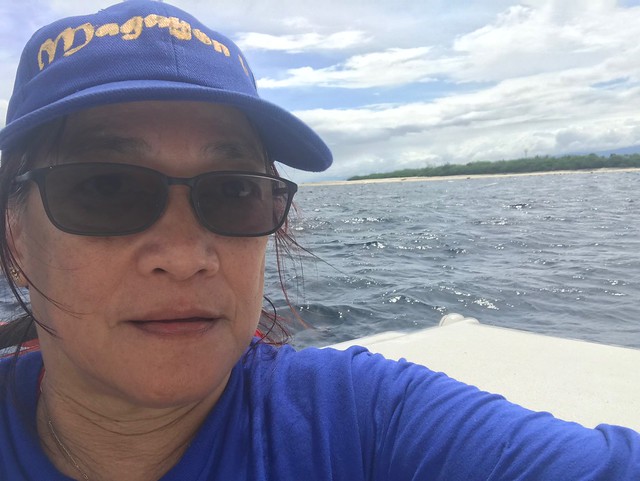 When setting the initial course after Bonito Island, Martin gets really depressed. It looks as if we would have to tack at the finishing line. But then, after fine tuning the sails, using the traveller, and with the help of the current, we have a fantastic run back. The two other catamarans in pursuit, but Kerida first sailing far West after coming around Bonito Island for some time for whatever reason, and and Soniya also going more westerly than we do. Both would later have to tack upwinds, saving us today‘s victory. For reasons unknown to us, Aragon catches up with us around a mile before the finishing line, and then overtakes a few hundred meters before. All of a sudden there is a complete wind mess, dropping, changing direction, we are at a loss, and at some point we even go backwards. When the wind stabilizes, Stargazer, a racer passes us and is heading to finish. It almost collides with Aragon and Aragon has to jibe to avoid hitting the finish line bangka. As a result of the unplanned maneuver, Aragon ends up behind us and we cross finish second. It then turned out that Stargazer crossed the start line one second too early, so it gets an 10 minute penalty. That means, we are first in the multi-hull class and also first overall today. Pretty good. 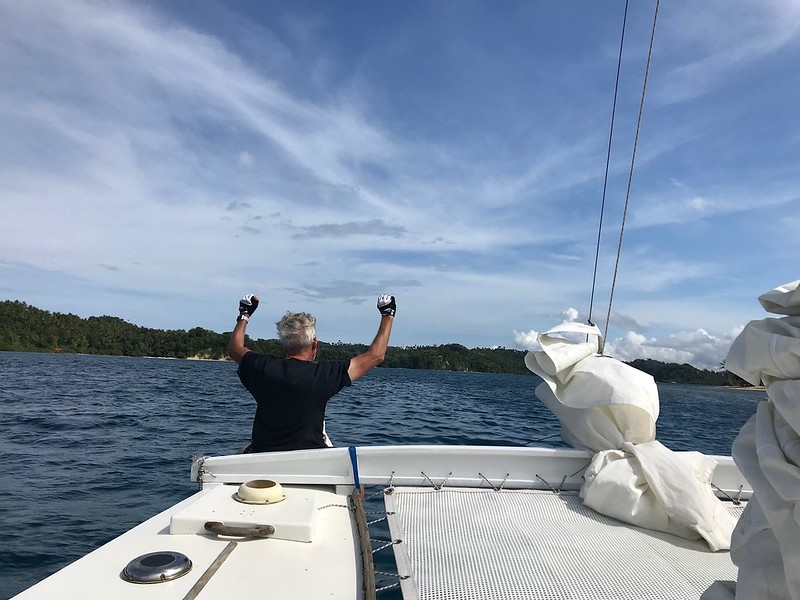 After the fantastic run today Magayon II has good chances for a good overall rating.

Halloween party in the evening. Gael wins the best dress price in the male category 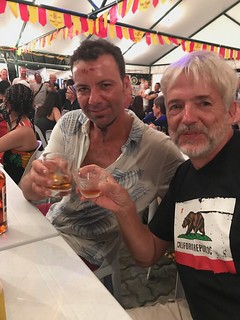 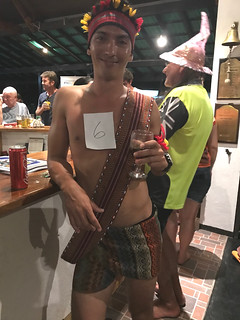 Breakfast in the Club after packing up our stuff and checking out. Everybody seemed to be a bit hangover this morning. Skippers briefing at 9:00 again. Changed starting times, we will start at 10:10:58. We wonder why the handicap was altered. Then the course. Towards Chicken Feather island and then around a bangka that will be anchored between the two islands and then back. We could not believe our luck, our best course – again. We actually have a chance to win something this time. We leave for the boat immediately after the briefing because of the earlier start time. In the process we forget to take the ice, so only warm soft drinks and beer today.

At the boat we fix one more rope of the traveller, which was still twisted around another rope and had made use it yesterday difficult.

Excellent start, within a minute after our time, and we are on our way. Gael is on the helm today. This time we overtake Aragon before reaching the boat marker after a hot pursuit across the channel. Kerida started only 10 minutes after us so obviously the much faster boat overtakes us before the boat marker and goes around the marker first. 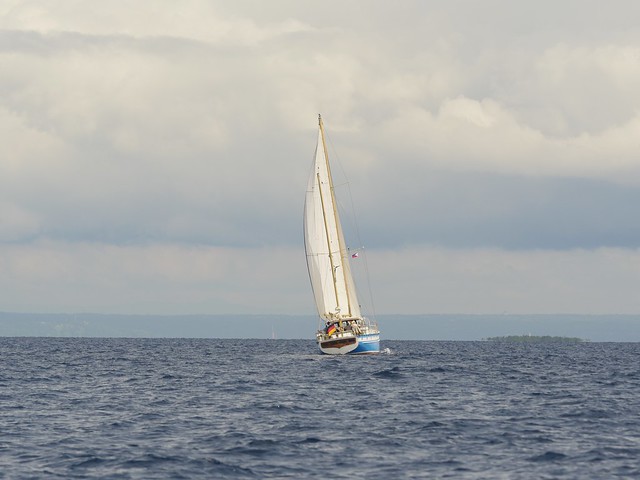 We get around the boat marker second and start heading back. Kerida, has the lead and finishes the race first. Soniya overtakes us downwind shortly before the finishing line and we hope they would have to tack, but they don’t, so she comes in before us again. Otherwise the race is pretty uneventful, we go across the finishing line shortly after the racers have just come out of Manila Channel.

Happy hour and Awarding of Prices

So we did pretty good this time after the poor performance on last year’s All Souls Regatta. Today’s multi-hull winner was Kerida. We came in third. 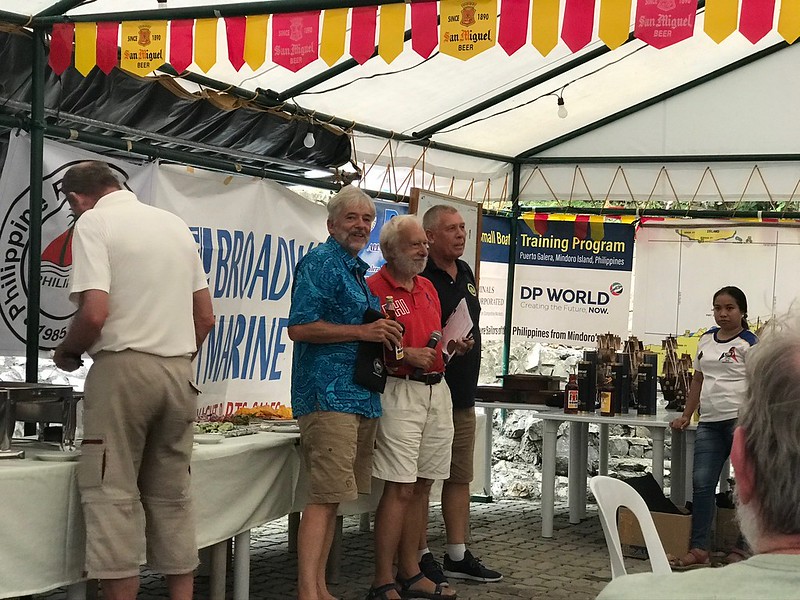 We did hope for maybe a second place in the overall multi hull class, but when the winners are announced we are in for a surprise. First in multi-hull overall rating was Magayon II, second Kerida and third Soniya. Kerida came in second in the overall rating, all classes. 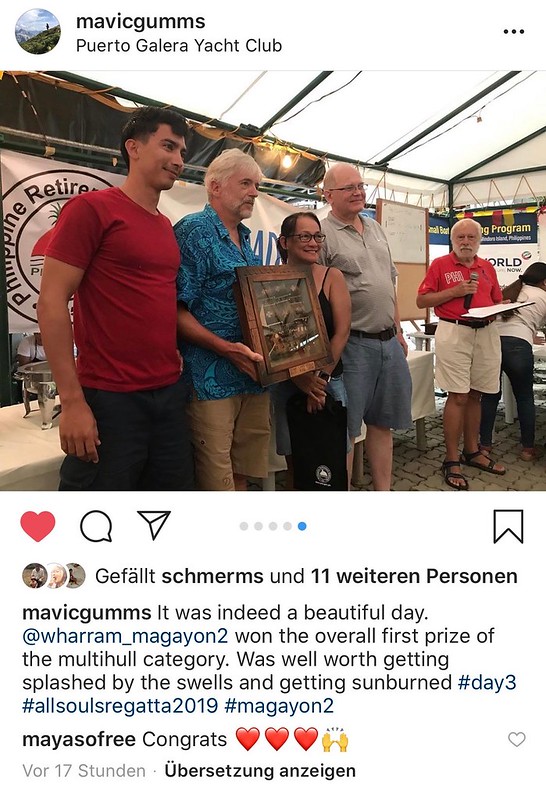 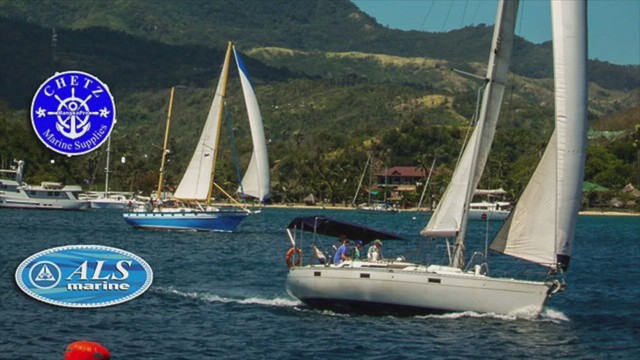 “Are you Martin?” “Yes” “I have to congratulate you for zooming by my 46 ft Benneteau on a small Wharram. I had a Wharram myself once, but a bigger one.”

Martin to one of the crew members of a competing multi hull: “How were you doing today?” Crew member: “We were doing OK. But even when you are going backwards we can not catch you.”

“You did it again..” one of the organisers after our victory on day 2.

“First in the multi hull class? Respect” – A former multi hull owner, who had lived on his cat for over 20 years.

Martin in the morning of the third day at the coffee machine to a crew member of another multi hull: “How are you today?”. “Good. But today the yellow boats need to be not so fast.”